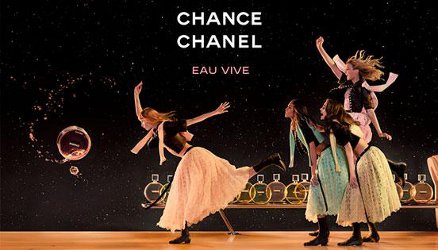 Have you noticed the trend of young women dying their hair gray? It can be startling to see a baby face capped with grandma’s hair. Sometimes it comes off as chic. But sometimes it’s an epic fail, almost as unsettling as politicians who dye their hair nut brown when Mother Nature clearly determined it should be gray — or gone. Mutton dressed as lamb, and vice versa.

To me, Chanel Chance plays this game. It doctors a big girl’s perfume for little girls by simplifying its heady oriental notes, freshening it up with citrus, and targeting its marketing to younger women. It’s like Guerlain Shalimar drawn as a kid’s cartoon and squirted with sweet musk, or like Thierry Mugler Angel with less verve and voluptuousness. To me, Chance feels off-kilter — or worse, banal. But, like dying your hair gray, it has its fans.

Chance, created by Jacques Polge, launched in 2002. Its notes include jasmine, orris, patchouli, musk, vetiver and vanilla. Chance’s signature is grapefruit plus patchouli plus vanilla plus musk, with negligible florals. The grapefruit and patchouli are clean, and the musk is sweet and vaguely nauseating. In the heat (and we’re under a heat advisory right now), it’s a loaded pistol. It dries down to ambery patchouli, and it wears a long, long time.

Chance is the sort of fragrance that could entrance a young woman looking for something “sexy” before she has the confidence to understand that sexy isn’t something you put on. It’s also the sort of fragrance you can find in a dozen knock-off versions at the drugstore, although they won’t have Chanel’s elegant packaging and cachet.

Chance’s flanker Chance Eau Tendre came out in 2010 and was also developed by Jacques Polge. Its notes include grapefruit, quince, hyacinth, jasmine, amber, cedar, iris and white musk. Eau Tendre is a soft, sheer fragrance that smells to me like banana, strawberry, sweet musk, and a touch of pepper. It has a gentle sillage and would suit a shy teenager. Or a shampoo. Eau Tendre vanishes on my skin within an hour, even with the whole sample vial dumped on. I smell little relationship between it and Chance, Sr.

Chance’s latest flanker, Chance Eau Vive, just came on the market this year and was created by Chanel’s new house perfumer (and Jacques Polge's son), Olivier Polge. Eau Vive is a sheer fresh grapefruit and is my favorite of the trio. Its notes include grapefruit, blood orange, jasmine, white musk and vetiver. Eau Vive is tart and citrusy with grapefruit and orange, but it’s not as bracing as a cologne. It holds a touch of its fruit’s sweetness, but it’s tempered by pepper.

As Eau Vive fades — and it fades fast — it settles into a clean musky vetiver with none of Chance’s cloying sweetness. In fact, besides grapefruit, it has very little to do with Chance. To use Robin's test, would I buy it? No. But I'd use it, probably to freshen my sheets, if it were given to me.

I have a lot of respect for Chanel. They’re giving their fans what they want, I guess, and keeping their market broad. Clearly, I’m not their target market. If you are, please comment!