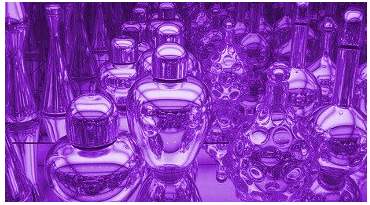 I thought 2009 was a pretty good year, and 2010 was even better. There was, once again, way too much new product — it looks like there will always be too much new product, regardless of what the world economy is doing. Oh well. It does mean that I have pretty much given up on smelling everything that matters. I suppose it could be done if you had absolutely nothing else to do, but I do have other things to do. I smell what I can. So, to all of my picks below, add "of what I managed to smell".

My choices for the year are just below. Scroll down to see what Angela, Erin, Jessica and Kevin thought was noteworthy in 2010, or click over to Bois de Jasmin, Grain de Musc, Perfume Posse or Perfume Smellin' Things. And of course, do add your own thoughts in the comments.

And my picks for best mainstream fragrances: Balenciaga Paris and Marc Jacobs Bang.

Best commercial: This year, there were three big money / big stars / big director productions — Bleu de Chanel, Gucci Guilty and Dior Homme. I didn't find any of them all that memorable, and can I just say that if I never see another 20 second teaser (or 120 second "director's cut") for a 60 second perfume commercial, that will be just fine with me? Like everyone else, I was charmed by the Old Spice Man — he gets my vote for 2010.

Best new niche brand: ok, they're not really new-new, but the Gorilla Perfume line at Lush made many people happy by relaunching the best from the defunct B Never Too Busy range, and their new additions make it clear they're going to continue to think outside the box. The fragrances don't all work for me (in fact, many of them don't work for me) but at least they don't bore me.

Clive Christian award for aspirational pricing: even the refills at Xerjoff are way outside of my budget.

Perfumer of the year: the supremely versatile Yann Vasnier, who made two of my favorites this year (the aforementioned Marc Jacobs Bang and Parfums DelRae Panache).

For me, 2010 was a very good perfume year, especially compared with 2009. My favorite new releases were Parfums DelRae Mythique (still can't get enough of this gentle iris suede); L'Artisan Parfumeur Nuit de Tubéreuse (I tried not to like it — and failed); XerJoff Richwood (warm and luxurious); Vero Profumo Rubj Eau de Parfum (the definition of delicate skank); Etat Libre d'Orange Like This (strange, radiant pumpkin flesh, immortelle, and ginger); and Penhaligon's Amaranthine (fruity, milky, tropical skank.)

My biggest discoveries were that I can wear and love a beautifully composed tuberose (hello Frédéric Malle Carnal Flower), and that I'm falling for fragrances I used to think of as too elegant for me (Carnal Flower and XerJoff Irisss, for instance.) My biggest disappointment is that I'm so behind in smelling new releases. Maybe next year I'll be able to report on some of this year's perfumes, including the new Cartiers and Diors.

Once again, I've met so many wonderful people through perfume this year. Perfume people must be the most generous, kind, fascinating, and stylish people out there. Thank you, and let's all get together soon for a huge dinner party. Maybe we can rent a villa near the Osmothèque.

2010 was a year of surprises for me. Two of my favorite releases came from houses with scents that I'd previously found pleasant, but not purchase-worthy: Honoré de Prés Vamp à NY and The Different Company De Bachmakov. After a pair of puzzling, cleanly functional fragrances, L'Eau Serge Lutens and Bas de Soie, Serge Lutens snuck up on me with his latest Paris-exclusive, the magical Boxeuses, a perfume that inspires some (only some, mind you!) of the wonderment conjured up by those recent pictures of his "home" in Marrakech. And who would have predicted that Tauer Perfumes, the House of Sacred Smoke, would dazzle me with a lily-of-the-valley and a sweet, super-vivid "homage to rose"? Vero Kern's strange and sensual Eau de Parfum version of Rubj and Patricia de Nicolaï's brilliant, unisex L'Eau Mixte round out my list of best fragrances of the year. Other interesting 2010 launches I've tried and would recommend sampling include Humiecki & Graef Bosque, Honoré des Prés I Love Les Carottes, L'Artisan Traversée du Bosphore, Maison Francis Kurkdjian Absolue Pour Le Soir and Gorilla Perfumes The Smell of Weather Turning.

I found several new fragrances to love in 2010. Some of them, like Balenciaga Paris and Amouage Opus III, are classically inspired beauties. Others, including Etat Libre d’Orange Like This and L’Artisan Parfumeur Traversée du Bosphore, are more esoterically charming. My favorite new rose-based fragrance is Tauer Perfumes Une Rose Vermeille, and my favorite packaging of the year is the We Love New York “coffee cup” design from Honoré des Prés.

Most of the past year, for me, was organized around our move into a new home. I stocked our new bathroom with Anjolie Ayurveda soaps and Pattern Body Washes, and fragranced the other rooms with a Blue Garden candle from Nest. As the record-setting summer heat arrived and home improvements continued, I managed to keep cool with Bathlife scented deodorant bars and liberal splashes of Murray & Lanman Florida Water. Now that we’re finally feeling settled in our new place, I’m lighting an Oliban candle from the latest Diptyque holiday collection and wishing everyone a happy and peaceful New Year.