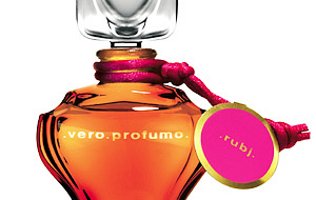 Orange blossom is saddled with associations the perfume lover has to shake off to really enjoy the flower's fragrance. First, orange blossom evokes brides, purity, and white lace. For someone looking to project a more sensuous image, orange blossom might not cut it. Next, a lot of cheap soap smells like orange blossom. As a result, when you sniff an orange blossom-based fragrance, you might be torn between visions of church weddings and of gas station bathrooms. Lucky for us, Vero Profumo Rubj, especially in Eau de Parfum, breaks the mold of the typical orange blossom fragrance.

Vero Kern is the nose behind Vero Profumo, founded in 2007. Unlike some perfume houses that burst onto the scene with a dozen perfumes, so far she's limited her offerings to three fragrances: Onda, Kiki, and Rubj. Each of the fragrances is distinctly different. Onda, with its leathery, almost fetid, vetiver is inscrutable and moody. Kiki's lavender is energetic and crisp. Rubj bursts with feminine light and emotion.

At first, Rubj Parfum smells to me of orange blossom, tuberose, jasmine, and a touch of rose, fruit, and ocean air. It is rich but uncomplicated, and easy to wear. Rubj's ingredients smell good, too — full and natural and expensive. But Rubj Parfum's real payoff comes when the fragrance has settled for an hour or so. The orange blossom turns from pale orange to sunset pink as civet, musk, and something that smells like burnt wood remind me the Parfum is better suited to experienced women than ingénues.

I wore Rubj Eau de Parfum to a dinner party a month or so ago. Kevin had just sent me a packet of samples, including the Parfum and Eau de Parfum versions of all the Vero Profumos. I already had a few drops of Onda and knew I liked it, and Kiki didn't seem right for an evening out, so I spritzed on a healthy dose of Rubj Eau de Parfum, slid a 1950s black lace cocktail dress over my head, and left the house. On the ride over, Rubj started humming the song the turbaned man in cartoons plays to mesmerize the cobra. When I arrived at the dinner, the host hugged me and said, "You smell good." A few hours later, on the couch, I had a coterie of guests smelling my wrists and neck. We decided the fragrance smelled like a "ravished ballerina." Right then I put Rubj Eau de Parfum on my "to buy" list. 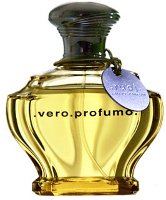 Not everyone will like Rubj, especially in Eau de Parfum, my favorite formulation. Cuminphobes will definitely want to steer clear. People who prefer an airy cage of scent to a fluffy blanket might not like Rubj, either. If Fleurs d'Oranger is too thick and suffocating for you, back away from the Rubj Eau de Parfum, although you might like the Parfum.

Rubj comes as a 7.5 ml Parfum (shown at top) and 50 ml Eau de Parfum (lower image). It isn't cheap, with the Parfum going for $195 and the Eau de Parfum $195 at this writing. For information on where to buy Rubj, see Vero Profumo under Perfume Houses.