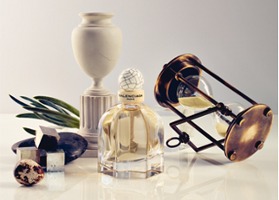 Balenciaga Paris is the latest fragrance from Balenciaga. It's the brand's first major launch since Cristobal in 1998, the first effort under new licensing arrangements with Coty, and the first under creative director Nicolas Ghesquière. It's fronted by Charlotte Gainsbourg, who is frequently described as Ghesquière's muse (see the very low-key Gainsbourg ad here). Perfumer Olivier Polge characterized the floral chypre as "present" — "It's here. When you wear it. You smell it."1

That might sound a little oblique, but it turns out to be a fitting description: when I first tried Balenciaga Paris on paper, my reaction was muted, and it wasn't until I'd worn it on skin several times that I began to see what he meant. Balenciaga Paris wears like a minimalist veil — think Prada's Infusion d'Iris or L'Eau Ambrée, although it smells like neither. It starts soft and fresh and watery, and if that sounds like something I'd hate, I'll add that there's no Glade and no melon, although it is rather fruity in the very early stages. It's also slightly metallic in the opening, and slightly powdery throughout. What does it smell like? Well, like a very soft violet, mostly (a nice nod to Balenciaga's iconic classic Le Dix, perhaps), over a woody-musky base (the notes: bergamot, spices, pepper, violet, carnation, oakmoss, cedar, vetiver, patchouli, labdanum).

The dry down is creamy and pale, but has a soft earthy buzz, and it gets earthier the longer it's on skin. I've ranted here already about the whole concept of "modern chypre", so will leave that aside and only say that Balenciaga Paris does not smell like a classic chypre, but nor does it smell like your average patchouli-laden modern chypre. The patchouli here is muted at most. Everything, in fact, is muted: think of it as a musky violet skin scent and you'll get the idea. It's one of those fragrances that you can forget you put on, then all of a sudden you smell something lovely and remember.

I don't know much about Nicolas Ghesquière — and of course, a brilliant designer doesn't always translate into a brilliant perfume — but reportedly his "...designs for Balenciaga express a dualism: the conservative world of good taste, on the one hand, and the moody hard-edged style of the street on the other."2 The fragrance seems a good fit with that characterization: it's quietly elegant, and while I wouldn't go so far as to call it edgy, it's modern and grown-up, and it doesn't smell like a carbon copy of something that came out three months ago. These days, for a mainstream designer perfume, that's edgy. Nice. 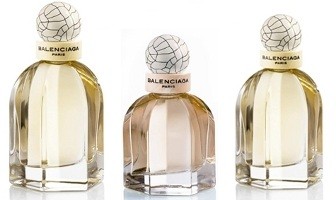