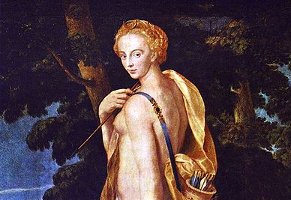 Just as everyone's clothing wardrobe benefits from a few low-key, comfortable items to pull on without thinking, perfume wardrobes need the same. Can you imagine how it would be to open the closet and find a row of late-1950s silk brocade Scaasi cocktail dresses? A dream come true! But what if they were all you had to wear? Before long you'd be desperate for a pair of well worn Levis and a cashmere sweater. I can easily see Parfums DelRae Mythique becoming my daily comfort wear.

Perfumer Yann Vasnier worked with DelRae Roth to create Mythique in 2009. Roth's vision of Mythique was inspired by a painting of Diane de Poitiers, French king Henri II's mistress and one-time owner of Chenonceau, a Loire Valley chateau with a dramatic, two-story gallery on stone arches extending over the Cher river (click here for a virtual tour). Roth mentions Diane de Poitier's beauty, horsemanship, and habit of wearing only black and white as part of her fascination.

Others might find more interest in the fact that Diane was 19 years older than Henri II. Diane started her career in the royal household as Henri's governess. When Henri turned 19, their relationship changed. Diane took on a number of royal responsibilities and often signed papers "HenriDiane", and in return Henri gave her Chenonceau and custody of the crown jewels. Diane swung some canny deals to buy the chateau outright, then grew mulberry trees to feed silkworms, bred a special apricot-peach hybrid, and planted gorgeously elaborate gardens. When Henri died after a jousting accident, his wife, Catherine de Medici, kicked Diane out of Chenonceau and took back the crown jewels. Seven years later, at age 66, Diane died. Scientists who have tested her bones speculate she died from years of drinking gold, thought to maintain youth.

Mythique has notes of mandarin, Italian bergamot, ivy, peony, jasmine concrete Sambac, Florentine orris butter, sandalwood, Indonesian patchouli, and ambrette musk. On skin it smells like buttery iris and fresh, green suede with a breath of salt. The fragrance is delicate, skin-like, and elegant. Its texture is fine and velvety, like the surface of an apricot.

But it's not so much how Mythique smells that draws me to it — it's how it wears. Mythique is light and unobtrusive, like leather chiffon underwear, if there were such a thing. It is present, yet close to the skin — me, but better. I almost feel it rather than smell it. Right now I have on three sprays from a sample vial of Mythique, yet if I walked into a nursery of babies I wouldn't smell out of place. Someone who hugged me might register a clean, vaguely sexy air, but I don't think it would read as "perfume". The Parfums DelRae website quotes French Vogue, which called Mythique a "halo of chic". That's a good description.

Mythique would be the bottle to grab if you could only take one perfume to Paris. It would go with just about any wardrobe and suit any function or season, from the crowded, warm intermission at the opera to lunch in the Jardins du Luxembourg on a summer day. Or, if like me you're stuck closer to home, Mythique is great for everything from walking the dog to meeting friends after work for a drink to raiding vintage clothing stores for the perfect rhinestone brooch.

Despite its versatility, Mythique won't please everyone. If you want to balance a heavy alpaca coat and boots with a smoky, exotic fragrance, Mythique won't do it. If you're heading out to a club and want a scent full of seductive fruit and musk, try something else. If your skin swallows fragrance whole, it might be too subtle. But if you want a perfume to rest lightly around you, like a second skin of sheer suede and afternoon garden air, you could do a lot worse. 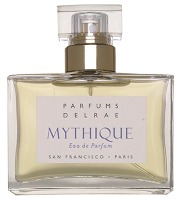 Parfums DelRae Mythique comes as a 50 ml bottle of Eau de Parfum. For information on where to buy Mythique, see Parfums DelRae under Perfume Houses.

Note: top image is the painting that inspired the perfume: Diane Chasseresse (Diane the Huntress; School of Fontainebleau) from the Louvre. We have most ignominiously cropped it, you can find the original at Wikimedia.