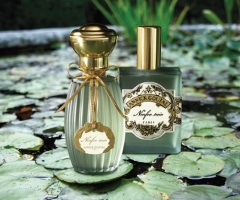 I've been half afraid to seriously investigate the state of citrus these days. Have the new IFRA regulations destroyed my summer favorites, like Eau de Guerlain and Chanel Cristalle? If it turns out that they have — or will before they're through — Annick Goutal's new woody citrus, Ninféo Mio, will help to make up my new summer arsenal.

Like Annick Goutal's last major fragrance release, Un Matin d'Orage, Ninféo Mio was inspired by a garden — in this case, a very specific garden, the Giardino di Ninfa (Ninfa garden) near Rome. The first thing you need to know about Ninféo Mio is that it's green. Very green, from the start right through to the finish. The opening is sharp green citrus, rather acidic, and more dry than juicy — think Hermès Eau d'Orange Verte with more lemon than orange. There's a fair amount of lavender in the early stages, and it adds an herbal cast to the scent, but it isn't harsh or overwhelming; those of you who say lavender is a deal-breaker really ought to give this a shot anyway (the notes: bergamot, citron, petitgrain, bitter orange, galbanum, lentisque, lavender, fig leaf and lemon tree wood). The dry down is wonderfully leafy-green and woody, and still quite citrus-y, with a whisper of pale florals and a sheer milky fig. It's slightly fruity, ever-so-slightly nutty, and later, warmer, earthier and a bit darker, with touches of dry hay.

It's been nasty cold here for the past week, and Ninféo Mio (does anyone else besides me detest the name?) is just what the doctor ordered; it smells like the very best part of summer: fresh, green, alive. It has just enough bite1 in the dry down to keep things interesting, so that unlike the multitude of fresh green scents we've seen over the past year, it never for a moment reminds me of dryer sheet, or any other sort of functional product. It isn't nearly as clean as Matin d'Orage (which I never did fall in love with), and it isn't like any other fragrance I own.2 The lasting power is quite good. Highly recommended, and going on my buy list.

Oh, and March liked it too! Do go and read what she has to say at Perfume Posse.

Annick Goutal Ninféo Mio was developed by perfumer Isabelle Doyen. It smells like a unisex, and is being marketed as such; as always with Annick Goutal unisex fragrances, you can pick whether you want the girl bottle (ribbed) or the boy bottle (square) but you'll get the same juice either way. It is due to launch in February, and will be available in 50 (ribbed) or 100 (ribbed or square) ml Eau de Toilette.

1. March notes something like "a faint but definite urinous note on my skin after the top notes fade, boxwoody would be the more delicate term, that bothers me not one bit, it fits in with the herbaceous-woody aspect of the scent", and cautions not to buy it unsniffed if that worries you. Of course, you ought never to buy unsniffed, right? But I will say that while urinous isn't exactly how I'd describe it, I know just what she means. I wouldn't call Ninféo Mio skanky, but it is most definitely not clean.