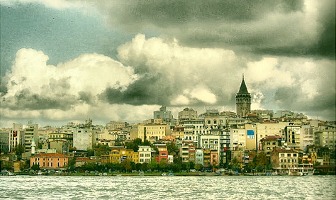 When he reviewed Coeur de Vétiver Sacré last week, Kevin said that L’Artisan Parfumeur (along with Diptyque and Comme des Garçons) no longer had "the heart for off-center or 'risky' perfumes". I'll have to regretfully agree about Diptyque, and I haven't thrown in the towel yet but admittedly Comme des Garçons' output has seemed a wee bit repetitive lately. On the subject of L'Artisan though, I'll have to respectfully disagree. I did not love Coeur de Vétiver Sacré, and I didn't love the two before that — Al Oudh and Nuit de Tubéreuse — either, still, loving a perfume is not the same as respecting it. None of them were dumbed down or boring, and Coeur de Vétiver Sacré and Nuit de Tubéreuse in particular struck me as interesting attempts to do something new with raw materials that can easily descend into cliché.

Traversée du Bosphore was inspired by a journey to Istanbul, and if you want to read the PR copy you can go take a look at the fragrance announcement, which includes what might or might not be a list of notes: tobacco smoke, apple, tulips, saffron, leather, Turkish Delight (rose and pistachio), musk. The leather, not quite smooth, not quite rough, is strongest in the opening. As advertised, we've also got some tobacco, fruity and sweet and not particularly smoky, in the early stages. There are spices, there is a touch of green. The apple is quite noticeable on paper; on skin, less so, although it stays fruity nearly to the end.

After about 30 minutes, the tobacco fades to a soft hum and the leather turns to the merest suggestion of suede, and Traversée du Bosphore slowly turns nutty-foody. There is rosewater and later, powdered sugar. It's sweet, but it's not the syrupy sweetness of say, Serge Lutens Rahät Loukoum. Later still, it's a rather quiet musky-woody vanilla, powdery and just slightly nutty. 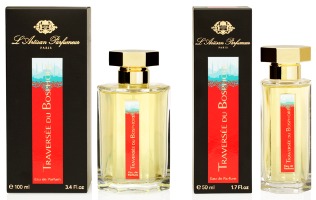 In case any of the above makes Traversée du Bosphore sound like a heavy spiced oriental, it's not: like Havana Vanille, it feels rich but (relatively) sheer, and it doesn't overwhelm in warmer weather. If you are particular about the gender identity of your fragrance, I would say it is unisex, but that the opening is likely to strike some women as too masculine and the dry down is likely to strike some men as too feminine.

L’Artisan Parfumeur Traversée du Bosphore is due to launch in November, and will be available in 50 ($115) and 100 ml ($155) Eau de Parfum. The lasting power is reasonable, but on the lower end for an Eau de Parfum.

Note: top image is autumn in ISTANBUL... [cropped] by UyKuSuZ'a MaSaLLaR at flickr; some rights reserved.

1. Turns out that there is no more Havana Vanille: it's been renamed Vanille Absolument.