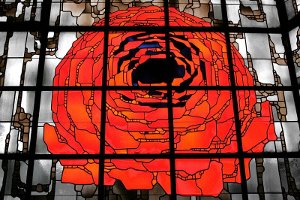 I wish I had a dollar for every time a fragrance salesperson has offered me a sniff of a new rose-based perfume while saying, in an apologetic, slightly lowered voice, "I'm not usually a rose person, but I really like this one." He or she will go on to justify this unexpected liking for the fragrance by explaining, "It's a really modern/fresh/youthful take on rose, not what you would expect." Unfortunately, the scent in question often turns out to be exactly what I expected: a faint, synthetic-smelling rose note diluted and obscured with so much bright citrus and sheer musk that the result is, indeed, a fragrance for non-rose-lovers.

Andy Tauer makes no such apologies or justifications with Tauer Perfumes' Scent no. 10, Une Rose Vermeille. It is not a soliflore, but the fragrance's overall impression is definitely the "scarlet rose" of its name, enriched by the other elements rather than masked by them — it is, as the perfumer himself says, "a true homage to rose." The composition includes top notes of lemon, bergamot, and lavender; a heart of rose, violet, and raspberry; and a base of vanilla, sandalwood, tonka bean, and ambergris.

The opening of Une Rose Vermeille is a characteristically Taueresque twist of greenish, herbaceous notes; it reminds me of the initial phase of Rêverie au Jardin. It's the most outdoorsy element of the fragrance. After that, you'll find yourself in a hothouse inhabited by full-blooming flowers, specifically the aldehydic rose-and-violet blend of the fragrance's heart. (If you love Frederic Malle Lipstick Rose or Bond no. 9 Broadway Nite, two other fragrances that feature rose-violet duets, Une Rose Vermeille may fit nicely into your perfume "wardrobe.") This floral accord feels dressed up for a festive evening, and it takes Une Rose Vermeille closer to the "feminine" end of the spectrum than any other Tauer fragrance, with the exception of Le Maroc pour Elle.

Une Rose Vermeille's raspberry note is sweet and sparkling, but it never quite tips Une Rose Vermeille into the "fruity" end of floral; it just adds an extra burst of color to the composition. The vanilla in the basenotes is warm and creamy, but the ambergris keeps things just earthy enough, even a bit risqué — it's like finding a few prickly leaves and thorns beneath the velvety rose petals. Tauer refers to this Eau de Parfum as "a gourmand rose," but to me, it feels less edible than jewel-like, rich and radiant. 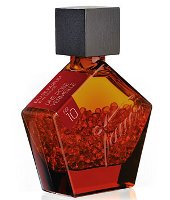 A note about the packaging for Une Rose Vermeille, which also looks jewel-like: according to the Tauer blog, this fragrance is sold in a 50 ml bottle that has been partially filled with translucent glass beads, thus reducing its volume to 30 ml. The beads will move and swirl around when the bottle is handled. I haven't seen a bottle in person yet — I'm sampling this fragrance from a spray vial — but this sounds like a novel and appealing effect.

Une Rose Vermeille is categeorized as one of Tauer Perfumes' "Homages," and that sounds right; it's a vivid and personal evocation of a red rose (rather than an attempted "update" or "re-invention" that ends up missing the point of the original flower). It has good staying power and, for the first hour or two, it gives off lush sillage.