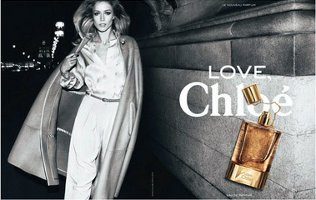 Chloé, as many of you already know, rejoined the land of the living, perfume-wise, in 2008 with the launch of their eponymous perfume, Chloé Eau de Parfum. I still remember smelling it for the first time and laughing to myself, thinking: ha, that'll never sell... Of course I was wrong, it sold just fine and then some, and it swept the 2009 fragrance awards. I have nothing to say in my own defense except that even I don't think I know the first thing about what will sell. I am wrong more often than not on that score (and on countless other scores as well). At any rate, I did not review Chloé Eau de Parfum then and I am not going to review it now; let's just say that I thought the conclusion in Perfumes: The Guide ("a dilute, dishearteningly synthetic muguet-rose good enough to grace a non-abrasive bathtub cleanser") was just about right.

So anyway, Chloé followed that up with the Eau de Fleurs trio, which I liked marginally better than Angie did, but not so much as to consider paying actual money for any of them. And now we have Love, Chloé.

Love, Chloé is meant to be about "radiant, generous, spontaneous femininity", and more specifically about "the olfactory vocabulary of cosmetics".1 In other words, it's meant to smell like cosmetic powder — or as they put it, "a lingering powder halo nestles into the skin like a feminine aura..." — and that is precisely what it smells like. The early stages are sweet, fizzy orange candy + cosmetic powder, and it's shrill for a few minutes before settling into something quiet enough to wear happily; the later stages are more of a creamy blended floral + iris-y cosmetic powder. A waft of pink pepper connects the two, and the dry down is rich without being loud. It's feminine, maybe even über-feminine, and sophisticated in the very clean modern manner.

Many fragrances — perhaps even most? — smell considerably less elegant than their advertising visuals would suggest, but Love, Chloé is a reasonably good fit with the perfectly coiffed, perfectly tailored Raquel Zimmermann, all done up in beige silks and wools, driving her vintage beige Mercedes convertible and waltzing through expensive restaurants in the television commercial.2 Still, it's not so forbidding as that might imply; I found it likable, even approachable, and it isn't at all the sort of big perfume that will make you feel under-dressed if you wear it with jeans. I just didn't love it. It's beautifully done, it's just a bit too polished for my taste: for (new) powder, I prefer the ever-so-slightly-off-kilter Balenciaga Paris or the nobody-likes-it-but-me Eau Claire des Merveilles by Hermès. Love, Chloé is very worth a try, though, and I would guess it's going to find more than a few perfumista fans. Oh, and that bottle can't hurt, no? 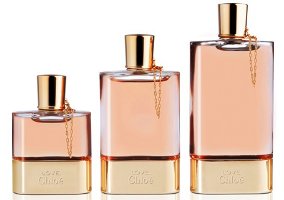 Love, Chloé was developed by perfumers Louise Turner and Nathalie Gracia-Cetto; the notes include orange blossom, pink pepper, iris absolute, lilac, hyacinth, wisteria blossom, heliotropine, powdery musks, talc and rice powder. It is available in 30 (no idea), 50 ($85) and 75 ($110) ml Eau de Parfum. I'm pretty sure that in the US, it is still exclusive to Saks Fifth Avenue, but do comment if I'm wrong.

1. all quotes via press release.

2. I am still laughing at Hannah MacGibbon, Chloé's Creative Director, claiming (in the "making of" video) that "the Love, Chloé woman, she's not aspirational, she's real, you can relate to her, she's a natural beauty". Uh, no. Hannah MacGibbon looks like a real, not-aspirational, natural-beauty sort of woman that I could possibly relate to; Raquel Zimmerman, as done up in the ad, looks like anything but.