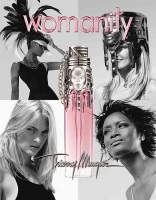 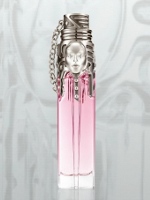 Developing a new perfume for Thierry Mugler cannot be a carefree undertaking, given that the first Mugler fragrance, Angel, is not what you'd call an easy act to follow. Consumers love and hate it in equal measure, critics everywhere have declared it genius, and it must be one of the most widely copied perfumes ever made. Alien, the follow-up, shared Angel's potent sillage but little else; it's clearly found fans, but it isn't likely it will supplant Angel's place in the history books.

Now we have Womanity. The Womanity brand started earlier this year as a website dedicated to "the invisible bond between women"; Mugler asks...

What if women spoke out about the pleasures of femininity – of being women, together, in the world today?

And what if women built for themselves the community that unites them?1

Women, of course, have been speaking out about the pleasures (and pains) of femininity, on the internet and elsewhere, for some time: it requires no more than a modicum of cynicism to ask whether the best place for them to continue that dialogue is on a corporate-sponsored website. That it will "capitalise on the web as a force for nourishing and continuing to build [the Mugler brand's] relationship with our fan base" is perhaps more to the point, and Mugler is hardly the only brand searching for a way to harness new forms of social media for commercial purposes.2

Womanity, the perfume, has lofty goals of its own:

With Womanity, the idea was to encompass energy, tenderness, and sophistication at the same time [...] We wanted to break new ground by including a savory note – not oceanic, but truly savory – in a fragrance. The world knew green, oriental, floral... then with Angel we innovated with a gourmand scent. To me, femininity evokes the notion of totality, of completeness; savory and sweet all at once. So we had to find a “salty” note, create an accord, and compose a rhythmic play between sweet and savory. 3

There are, of course, other perfumes that play on the contrast between sweet and savory, and even on sweet and umami notes; in that sense Womanity does not sound outrageously new or exciting. That the salty element for Womanity was eventually found in caviar, and that the materials were developed, along with fig for the sweet note, using a new process developed at the fragrance & flavor company Mane, sounds more intriguing.4

Womanity starts with citrus, rather loud and diffusive — on paper I found it slightly overwhelming, on skin, less so. It's high-pitched and fresh, and reminds me of the nearly-screechy, über-fresh but oddly flat — modern citrus radiates but does not sparkle — citrus opening of any number of other perfumes of the last couple years, although here the aura is decidedly pink instead of the usual green: it smells like pink lemonade and pink grapefruit accented with pink Pez candy and deepened with red berry-ish fruits.

As the citrus recedes, we get a full, round fig note. It's sweet and milky and green, yet Womanity remains persistently pink in the early stages. It has a distinct but unidentifiable floral aspect, and in that sense it does not smell like a radical departure, far from it — it smells comfortably familiar to anyone who has been sniffing around department store fragrance counters recently.

The caviar is up next. Worry not: there is perhaps a human out there in the world who would smell Womanity, not having read the press materials, and say "caviar!", but I would think that human is rare. For the rest of us, what we've got is some inky-iodine-dark-salty stuff; as advertised it is slightly (very slightly) leathery, and vaguely suggests the sea without smelling of a conventional marine note. It does not remind me of food, and Womanity as a whole does not smell like anything you'd be tempted to eat.

The caviar provides, to my nose, the sole surprise in Womanity, but the biggest surprise of all is how subtly it is used. Don't get me wrong, Womanity is not a sheer scent, but by the time the caviar accord arrives on the scene, it's downright quiet for a Mugler production, and the caviar is used with a light hand. I found it interesting but not disconcerting, and Womanity in many ways struck me as tamer and easier to wear than either Angel or Alien.

As a rule I like screechy citrus and I like fig, and it turns out that I like Mane's new caviar accord too. So it's no surprise that I found Womanity likable. But I don't love it, and as I so often do with promising new fragrances, I redesigned it in my mind: I made the fig greener, I toned down the sweet and the pink, I amped up the caviar accord and the woods. What I was left with, of course, would suit me fine but probably wouldn't sell nearly as well as Womanity, although given my dismal track record for predicting the winners, I have no idea whether Womanity will be a hit even as it stands. I don't see why it wouldn't — and once again Mugler has come up with some fun packaging — but I'm prepared to be surprised. What will really surprise me, though, is if Womanity inspires the strong reactions of Angel, or even Alien. When you smell it, do come back and tell me if I'm wrong. 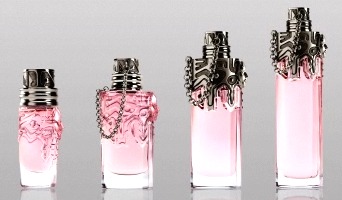 Thierry Mugler Womanity was developed by a team of perfumers headed by Fabrice Pellegrin, and will be available in 10, 30, 50 and 80 ml refillable bottles of Eau de Parfum and in matching body products. Womanity is due to launch in June. In the US, it will launch at Bloomingdales in July and be exclusive to that store until October.

2. The quote is from Thierry Mugler President Joël Palix via the Moodie Report.

3. Thierry Mugler, quoted in the press materials for Womanity.

4. From an interview with Pierre Aulas, Olfactory Artistic Director at Clarins, via the Womanity press materials:

Mane suggested that we use their exclusive molecular extraction system because it would make it possible to take the olfactory effect further. The principle of molecular extraction is not to observe the surrounding air (which is the case with head space), but to steep the ingredient that you want to analyze into an inert and totally harmless gas. The raw material is thus immersed in a gas in liquid state, in which it will macerate for a certain amount of time. Then the liquid gas evaporates, leaving only 2 drops of the olfactory quintessence in liquid form, which will be analyzed by gas phase chromatography; it is much more precise than the former “Head space”-type methods because you totally immerse the substance in this liquid gas; much greater interactions take place and you can capture elements from the top, heart and base alike, with a great deal of precision. This molecular extraction results in olfactory reconstitutions that enable us to create an accord extremely close to the element in its natural state.