Marc Jacobs gets lots of media coverage, but interviewers seem most interested in Jacobs’ weight. Though I’m impressed by Jacobs’ candor, isn’t he bored with talking about his appearance: his workout routine; his colon-saving diet*; his hair transplants; his tattoos and grooming rituals? Jacobs needs a PR maven who’ll demand a moratorium on all weight-loss talk…after all, Jacobs lost his “excess” pounds years ago.

The launch of Jacobs new men’s fragrance, Bang, has (at last!) given him something new to talk about — even as he uses Bang’s debut to show his half-naked body in perfume ads and magazine spreads (see this month’s Calvin Klein interview with Jacobs in Harper’s Bazaar for a “plumber shot” of Jacobs’ rear end…or don’t).

Let’s begin with the name of Jacobs’ new fragrance — Bang. There are certainly the “Wham!” “Bam!” “Pow!” connotations (the “banged up” Bang bottle), but there’s also the X-rated “bang” (sexual intercourse). Guess which direction the Bang PR materials go? Sex! There’s a rather juvenile Facebook game hosted on the Bang website called “Bang You’re It!”  Quoting the press release: “‘Bang You’re It!’ is free for interpretation and allows users to bang friends’ profile pictures and get banged in return in order to rack up points. By banging someone, you are essentially banging their profile picture with the same impacted look as the Bang fragrance bottle…Get banged by people from other countries. Get banged after midnight.” Do ADULTS “bang each other” on this Facebook page? Off I went to find out. And guess what? I ended up Banging myself (see the evidence below). Will I lose my sight, sprout hair on my palms, go insane…or simply be embarrassed I banged myself so publicly? 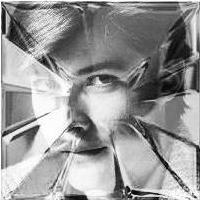 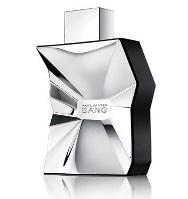 The Bang fragrance bottle is interesting in appearance, but its center of gravity is off; it falls over pretty easily (best to set it on its side to avoid a falling-dominoes-like event in your perfume cabinet). And just like the slightly sleazy Bang photo images from print ads (with a nude, oiled-up Jacobs laying on Mylar sheets with a Bang factice held between his splayed legs — sexy? really?) the Bang bottle design doesn’t match the vibe of the perfume: a subtle spicy-wood fragrance (and my favorite mainstream men’s perfume release of the year so far).

Bang, developed by perfumer Yann Vasnier, includes notes of white, pink and black peppercorns, “primal masculine” woods, elemi, benzoin, vetiver, white moss and patchouli. Bang begins with a strong, sweet nose-tickling pepper accord (black pepper is very noticeable) mixed with pale vetiver. Suddenly, smooth, resinous wood notes appear; the wood aromas remind me of lemony hinoki wood, pungent cedar and redwood. As the fragrance (quickly) dries down, I smell musk (not too clean but not dirty either) and more pepper (this time with hints of ‘sweatiness’ and  ‘cured tobacco’). Bang has a talc-y patchouli-moss finish — noticeable only if you put your nose to Bang-scented skin.

Bang is a quiet and light fragrance; it lasts on my skin for about three hours before I need to reapply it; the fragrance stays close to the body (there’s hardly any sillage after the first hour of wear). Though Bang is marketed to men, any woman who wears Comme des Garçons Series 3: Incense fragrances or Series 2: Red Palisander (also by Vasnier, with Françoise Caron) can wear Bang.

Note: Egon Schiele certainly knew how to paint men (and women) with few or no clothes on and still give them power, sexiness, dignity and lots of character. Top images by Egon Schiele, cropped, left to right: Sitzender männlicher Rückenakt, 1910, Mime van Osen with crossed arms, 1910, Stehender männlicher Rückenakt, 1910, via Wikimedia Commons; middle “Banged” image of the author, courtesy of “Bang You’re It!”