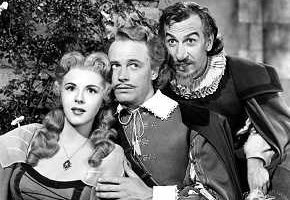 Just as everyone’s clothing wardrobe benefits from a few low-key, comfortable items to pull on without thinking, perfume wardrobes need the same.

It is present, yet close to the skin — me, but better. I almost feel it rather than smell it.

But if you want a perfume to rest lightly around you, like a second skin...you could do a lot worse.

Those lines were pulled from Angela's review of Mythique, by Parfums DelRae. Now let's say that all sounds awfully good to you, but Mythique wasn't exactly the second skin you were after (as was the case with me: I thought Mythique was lovely, but it did not move me). You've got your second chance with Panache, the brand's latest release. It's named for a line from Edmond Rostand's play, Cyrano de Bergerac:

One thing is left, that, void of stain or smutch, I bear away despite you ... My panache.

Panache is meant to be a unisex fragrance "centered around" vetiver. I don't think your average vetiver fiend will find it passes muster as a vetiver scent, and by the same token, if you hate vetiver you needn't necessarily cross Panache off your list. It's probably just as well: I am a vetiver fiend, but my vetiver fragrance needs are already more than adequately covered.

Panache opens on a peppery-boozy rum (the notes: ambrette seed, baie rose, magnolia, bergamot, rum extract, vetiver, jasmine Sambac absolute, geranium, ylang ylang, cardamom, oakwood extract, olibanum, Cosmone, Serenolide, Moxalone, cedar, amber and honey). It's slightly nutty and green, and it's strong for all of 3 or 4 minutes before settling into the "veil of scent" or "second skin" that ties it stylistically to Mythique.

The heart has a distinct floral aspect although magnolia is the only flower I really notice. The base is warm and soft and musky. There is vetiver, yes, but also honeyed wood, and the oak in particular stands out. The combination of rum, honey, cedar and oak call to mind my old favorite, Serge Lutens Chêne, and while they're far from dupes, Panache could be a variation on Chêne — a Chêne for the fragrance customer who doesn't want to be bopped over the head with a block of just-cut wood still oozing sap, perhaps. Panache is smoother, gentler, kinder, and as with Mythique, it has a way of lingering long after you stopped thinking about your fragrance; more than once, I was surprised to find that my arm smelled awfully nice. 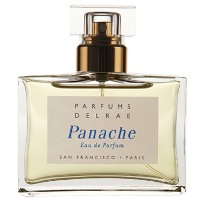 I liked Panache the first time I tried it, but I wasn't wildly enthusiastic. Later wearings have increased my affections. It's going on my buy list, but there are many things on my buy list that I'll probably never pay full price for, and Panache will be one more. Still, you never know when you'll get lucky, right?

Parfums DelRae Panache was developed by perfumer Yann Vasnier; it is available in 50 ml Eau de Parfum, $150. For buying information, see the listing for Parfums DelRae under Perfume Houses.