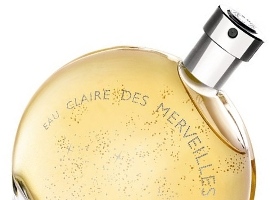 I don't think the new Eau Claire des Merveilles from Hermès has officially launched yet, but it's on counter at Hermès boutiques and at Nordstrom. Depending on how you count, it's the 3rd or 4th flanker to 2004's Eau des Merveilles, which has already been joined by Parfum des Merveilles and Elixir des Merveilles.

Eau Claire des Merveilles, which was developed by Hermès house perfumer Jean-Claude Ellena, is pretty much exactly as it was described in the press materials: delicate, soft and sparkling, with powder notes and vanilla. The start is wonderfully fizzy citrus soda; that softens into a creamy-sweet (but airy) cosmetic powder, lightly vanillic, with just a hint of the salty woody amber from the original Eau des Merveilles underneath — if I did not know it was a flanker to Eau des Merveilles, I doubt I would have thought of it. It's light and summery — much more so than the chocolate-orange Elixir des Merveilles — and wears perfectly in the heat and humidity of an East Coast summer.

A side note: 1 spray of Eau Claire des Merveilles layered over 2 or 3 sprays of Eau des Merveilles is perfect, so much so that I really am tempted to buy.

Hermès Eau Claire des Merveilles is available in 50 and 100 ml Eau de Toilette. The lasting power is about the same as that for Eau des Merveilles.