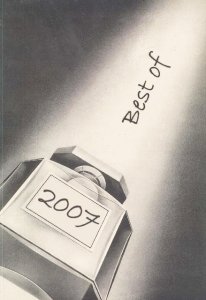 It's that time of year again...

Fragrances that didn't: as always, too many to list, but I was particularly disappointed by Comme des Garçons Play, Serge Lutens Louve and the whole of the L'Occitane Notre Flore collection.

Best celebrity scent: Sarah Jessica Parker Covet. Some people really hated it, but hey, at least it wasn't so mind-numbingly dull that nobody cared either way.

Worst perfume news of the year: Ebay forbid the sale of perfume decants, making serious perfume addiction more inconvenient than it already was.

Best concept and packaging: I haven't even smelled them yet, but Annick Goutal's L'Orientaliste trio in the white leather box is hard to resist.

Best perfume commercial: I only see a fraction of television perfume advertising (if it didn't make it to YouTube, I probably didn't see it) but of what I saw, it was a tie between Kenzo Tokyo & Christian Dior Midnight Poison.

Perfumer of the Year: Jean-Claude Ellena, for lifetime achievement, and for exceeding expectations as house perfumer at Hermès. Luxe collections from mainstream houses have become very nearly de rigueur, but to my mind, none of them can beat the Hermessences.

Overall, I thought 2007 was a very good year for mainstream fragrance, but other than a few bright spots, a rather dull year for niche fragrance. All told, there was just way too much product. With 800+ new fragrances, it stands to reason that much of it is going to be dreck, and it was.

And a few picks and pans from Now Smell This contributors:

Angela's best of 2007: Parfumerie Generale Corps et Ames, an unapologetically green, mossy, and assertive fragrance, retro and modern at the same time and glamorous as all get out. Lorenzo Villoresi's Alamut, gentle, powdery, and full of ambery sandalwood — in fact it's just about the opposite of Corps et Ames. I know Alamut isn't very popular in the perfume blogosphere, but, hey, more for me. Perfume by Richard Stamelman, a rambling, repetitive, not particularly well written cultural history of fragrance. It's also an irresistible compilation of perfume anecdotes, gorgeous ads, and drool-worthy bottles. I love to spend an hour with a glass of wine and my copy of Perfume, digging into it randomly. Remember how as a child you wore out the pages of the Sears Christmas catalog — the one with all the toys? That's how I am with Perfume.

Marcello's best of 2007: In the category "Best perfume book of 2007" my vote goes to Une Histoire Mondiale du Parfum, edited by Marie-Christine Grasse. It's a true coffee-table book, filled with beautiful pictures. Bits and pieces of archaeology are mixed with anthropology and history to reveal some of the continuities and discontinuities in perfume culture. The result is a patchwork of essays of varying quality, but it's put together with love, and I have a soft spot for ambitious projects like this anyway. Among the contributors are perfume authors Elisabeth de Feydeau and Annick Le Guérer, and perfumers Jean Kerléo, Jean-Claude Ellena and Carlos Benaim. Review to follow soon. This month marks the launch of Les Orientalistes by Annick Goutal, and I was very fortunate to try them (on paper blotters) back in May. I should be getting my samples of this trio just before Christmas...Ambre Fétiche is the one I look forward to most!

And be sure to check out these blogs for more of the Best of 2007: