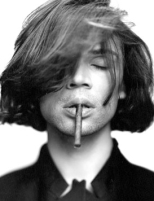 I am rather late to this bandwagon*, but it is a worthy bandwagon so I'm jumping right on. We are lucky that Juozas Statkevicius launched his first fragrance before he became a household name (assuming he ever does), because it is far from the usual designer fare, and as we can see from the contrast between Matthew Williamson's mainstream perfume debut and what we know about his personal preferences from the smaller-scale (and now discontinued) Incense fragrance he released with Miller Harris, once a designer hits the big time, it is all over scent-wise. For that matter, releasing a huge commercial hit in the fragrance department probably helps a designer hit the big time, no? I will keep an open mind about John Galliano's fragrance debut next year, but how likely is it that he won't bow to commercial pressures and launch a sweet fruity floral? Not very.

None of that is meant to imply that Juozas Statkevicius Eau de Parfum is one of those esoteric niche scents that will leave most of the population shaking their heads in dismay; it is a very wearable, even comforting, rendition of incense, in fact, I would call it more wearable than many of my incense favorites, being neither cold & churchy, nor overly dry, nor unapproachably musty. It is most frequently described as soft, and that is exactly what it is: a velvety plush incense, not quite dark and not quite pale, with an ambery wood base sweetened with just the right touch of vanilla.

In feel it reminds me very much of Donna Karan Black Cashmere, although they are far from smell-alikes; the Juozas is softer all around — less spicy, less dense, less mysterious. It is a must-try for incense lovers, and might even be the sort of thing to convert the doubters. I should also note that it is very much a unisex scent. If you demand some overt femininity from your incense, you might try Barbara Bui Le Parfum.

I said that Juozas Statkevicius Eau de Parfum was far from the usual designer fare, so no surprise that you're going to pay niche prices: it is $165 for 50 ml. For buying information, see the listing for Juozas Statkevicius under Perfume Houses, and you can see a picture of the bottle here.

Note: image via josefstatkus.com. Update: there was some question as to whether or not the picture above is actually of Juozas Statkevicius, or just some random model. I found another picture, what do you think?