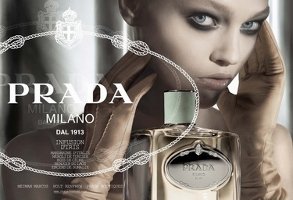 Infusion d'Iris is the latest fragrance release from Prada, and I was looking forward to smelling it on several counts. Iris is one of my favorite notes, and the iris perfume sold on a small scale in the Prada boutiques a few years back (sorry, not sure if it is still there or not) was lovely. I've also been impressed with Prada's mainstream perfumes to date, and I am especially fond of Prada Man, so I was excited to hear that the same perfumer who created that scent (Daniela Andrier) did Infusion d'Iris as well.

My first impression wasn't entirely positive. The first thing you need to know about Infusion d'Iris, if you haven't smelled it yet, is that it is light. Really light — hence, perhaps, the massive vat of juice the model is swooning over in the ad shown above. It is just a wispy little slip of a scent. On my first encounter, I sprayed a little on a card, and thought it quite nice, but within an hour, it didn't smell like anything worth worrying about either way.

Still, on my next shopping trip, I sprayed a little on skin on the way out of the store. It is just as well that Infusion d'Iris wasn't actually for sale yet, as I might have gone back to buy it on the spot. The top notes (notes include mandarin, orange blossom, galbanum, iris, incense, benzoin, cedar, lentisc and vetiver) are bright and sunny, with a nicely juicy orange tempered by a bit of greenery. It smells summery and fresh, but without the sharpness of say, Acqua di Parma Iris Nobile. After that, everything seems to join in all at once, and the early stages, where a pale sheet of iris is laid over incense, resins and woods is simply gorgeous.

It is earthy, but not nearly so much so as some other iris favorites, and it doesn't have that turnip-roots-caked-with-dirt thing that some (not me, mind you) find disagreeable in scents like Serge Lutens Iris Silver Mist or The Different Company Bois d'Iris. It gets smoother and softer the longer it is on skin, but I found it much more engaging on skin after several hours had passed than I did on a card. It is soft-spoken, but not dull at all, and while it calls for a more liberal application than you'd expect for an Eau de Parfum — and even then, don't go looking for major sillage — it is actually rather tenacious in terms of lasting power.

Fans of deeper, earthier iris scents may find Infusion d'Iris too insubstantial for their liking, but I was charmed enough that on the third try, I bought it at full retail price, which as I noted on Friday is something I almost never do. Back when I announced Infusion d'Iris in July, I posted a quote from Daniela Andrier, and it turns out to be so spot-on that I'll repeat it here:

“This perfume does not mimic any current trends in perfumery,” Andrier noted. “It does not follow any olfactory or descriptive stereotypes of what a woman should smell like, but rather expresses itself through its contrast between a great freshness and apparent lightness and a type of tender veil, sensual and strong, that envelops the body and the clothing of the woman who wears [it].” (via moodiereport)

I won't claim that Infusion d'Iris is wildly innovative, but it has a kind of quiet elegance that isn't often found in mainstream designer offerings, and it is so nice to find something in a department store that doesn't smell like it has been focus-grouped into banality. It isn't hard to imagine Infusion d'Iris being released by a niche house for considerably more money than the $68 I paid for my 50 ml bottle. And don't worry about Andrier's "clothing of the woman" phrase; a man could easily wear Infusion d'Iris. 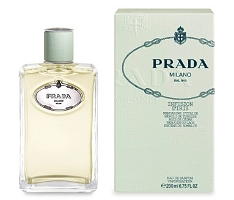 Prada Infusion d'Iris comes in 50, 100 or 200 ml Eau de Parfum spray; 400 or 750 ml splash with 30 ml flask and funnel; and in a variety of bath and home fragrance products including linen water and candle. It appears to be exclusive to Neiman Marcus at the moment, but I assume it will eventually be found in the usual places.

5 perfumes: iris fragrances for summer
And 25 more fragrances every perfumista should smell
The 2008 fragrance awards season ~ the big winners