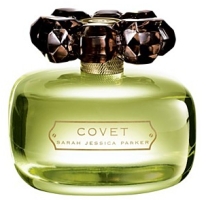 Covet is Sarah Jessica Parker's latest fragrance release, following 2005's Lovely. That Parker waited two years to launch her second perfume sets her apart from her overeager compatriots in the celebrity fragrance market; Britney Spears has done one fragrance a year since she started out with Curious in 2004 (and will reportedly release 2 this year), and Jennifer Lopez has managed to release 7 since 2002.

Despite the fact that I didn't adore Lovely, I picked it as the best celebrity release of 2005. I thought it very well done, and while it was more of a crowd-pleaser than I'd hoped — Parker herself was known to wear an unusual layered combination of Bonne Bell Skin Musk, Comme des Garcons Avignon and a nameless "Egyptian oil" that she purchased on the streets of New York (via One Nosy Dame by Chandler Burr, The New York Times 10/16/2005) — at least it wasn't the sweet fruity concoction for 'tweens that we've come to expect from the celebrity fragrance genre.

Covet promised to be a bit more daring. At the time Lovely was released, Parker noted that "If I get the opportunity, my next scent will be genderless. Fuller. Riskier." (Ibid.), and more recently she has called Covet "more agressive" than Lovely. Covet was developed by perfumer Frank Voelkl, and the notes include wet greens, geranium leaves, Sicilian lemon, lavender, chocolate, honeysuckle, magnolia, muguet, musk, vetiver, bois de cashmere, teakwood and amber.

Covet's opening is rather sharp and high pitched; on a test strip, all I could smell was lemon and lavender blended with lots of almost-bitter green. On paper and on clothing, I found the combination vaguely reminiscent of citronella (although mind you, I like the smell of citronella). On skin, it is softer and the top notes are not so long-lived; the chocolate, though subtle, softens and sweetens things rapidly. Covet develops quickly thereon in: the flowers go by in a flash, rather as they do in Lovely, and in no time we have arrived at the woody musky base. It is considerably darker, deeper and earthier than Lovely, but the chocolate and a dash of vanilla keep it lightly sweet and edible, and little whiffs of the lemon and lavender continue to weave in and out. In the final stages, it makes a vague nod towards Angel's classic combination of dessert notes over a warmer, sexier oriental base, although here the notes are polished smooth and not quite so sultry.

Like Lovely, it is just terrifically well done, and it doesn't, like so many celebrity scents, smell like something that was dashed off over the course of a couple meetings. I wouldn't go so far as to call it wildly risky, but it isn't so tame as Lovely, and it fairly oozes personality next to Gwen Stefani's rather lackluster L. L promised but failed to deliver a "fusion of masculine and feminine", Covet, while still not genderless in the classic sense, does have more of a masculine edge. For that matter, I thought a man could get away with Lovely. We seem to be reaching a stage where gender in fragrance is determined by packaging and advertising as much as by smell.

I found the lasting power rather amazing. The first day I wore Covet, I applied 3 good sprays to one arm, and 6 hours later, after a long bike ride and hot shower with sugar scrub, it was still going reasonably strong.

The packaging and advertising for Covet have a playful aesthetic that is in stark contrast to the demure, pretty-in-pink aura surrounding Lovely. I can't say I love the bottle, myself. The juice is an odd yellow-ish green that again reminded me of citronella, and I don't much care for the molded brown plastic cap. Ah well. In the end, I'd say Covet is the best celebrity release since Lovely, and here's hoping that Coty lets Sarah Jessica Parker go really wild with her third scent.

Sarah Jessica Parker Covet is exclusive to Macy's until mid-August, and is available in 50 and 100 ml Eau de Parfum and in matching body products.