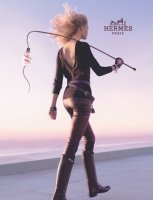 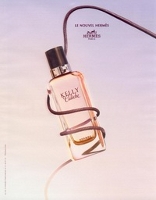 Kelly Calèche, which launched recently at the new Hermès boutique on Wall Street, is the brand's first major feminine fragrance since Jean Claude Ellena took over as house perfumer. I adore Hermès, and I adore the work of Jean Claude Ellena, and I thought last year's Terre d'Hermès was brilliant. Kelly Calèche was the perfume release I was awaiting most eagerly this year.

Kelly Calèche was named for the Kelly handbag and the original Calèche perfume. Jean Claude Ellena, who frequently cites a book as inspiration for his fragrances, mentioned for this one Jean Giono's Jean le Bleu, about a village cobbler and his son (Giono was also named as an inspiration for Terre d'Hermès), and particularly a passage about "making soles in angel leather". The notes for the floral leather scent include iris, lily of the valley, mimosa, tuberose and climbing rose. (quote and notes via Women's Wear Daily, 5/11/2007)

Kelly Calèche starts off with sparkling citrus. For a few moments, it calls to mind the bright, grapefruit-y effervescence of Rose Ikebana, then it gets a teensy bit darker, with the lightest possible touch of something smoky and dry, and this stage reminds me vaguely of Osmanthe Yunnan. There is a smidgen of something fruity, almost like peach or apricot, and it seems to fade away and then reassert itself repeatedly over the next few hours. The heart is a blended floral, muted but not quite sheer. Everything about it is soft: the mimosa, the iris, the rose, and I can't smell the tuberose or lily of the valley at all. There is another floral note that I recognize but can't seem to call to mind, and I've been waiting in vain all week for the name to pop into my head.

If you didn't know there was leather, you might not notice it, but it is there if you go looking for it: as velvety-soft and mild as leather can be and still be leather. It does intensify slightly after an hour or so, but trust me, you'd needn't be a leather fiend to like Kelly Calèche, and leather fiends may find it too civilized for their liking.

It is not at all the girly-silly scent I feared it might be when I first heard the name and saw the picture of the bottle with its pink juice (you can see a closeup here), but nor is it anything like the the bold sort of fragrance implied by the woman with the boots and whip in the ad. The ad might more appropriately show a young lady in a tasteful summer dress at a garden party, with a sparkle in her eye, perhaps, but still, well-mannered.

I talk frequently about perfumes that I find pretty but essentially dull — scents that have nothing much to distinguish them from the zillions of other pretty but essentially dull fragrances on the market. When I first started keeping notes on the fragrances I tested, I often used the shorthand "generic department store scent", and I'm sure many of you perfumistas know exactly what I mean.

Kelly Calèche is not that sort of scent. First off, it isn't merely pretty. Jean Claude Ellena knows what he is about, and Kelly Calèche is beautiful. I was disappointed with it the first few times I wore it — it wasn't quite what I had expected — but it won me over eventually, and more than once I had that lovely feeling of forgetting I was wearing perfume at all and then suddenly noticing that something smelled really good. So on the one hand, I'd take it over any of the mainstream fragrances released so far this year, and it is most definitely full bottle worthy. Still and yet...I can't help but wish it were just a little more daring and a little less well-behaved, and for no good reason, I've convinced myself that more compelling variations were discarded over the course of its development.

Hermès Kelly Caleche is an Eau de Toilette, and is available in 50 and 100 ml. It is currently exclusive to the Wall Street Hermès boutique; it goes into wider distribution in August.

Update: Anyone who was hoping for something bolder from Kelly Caleche would do well to try the Eau de Parfum version, which launched in 2009. It isn't radically different from the Eau de Toilette, but it's a deeper scent, with more oomph. The dry, smoky notes in the opening are stronger, and it's fruitier and sweeter — in the early stages, it's now much closer to Osmanthe Yunnan's tea and apricots than Rose Ikebana's crisp citrus rose. The florals in the heart are richer and fuller, and while it's still quite rose-y, the mimosa and iris seem amplified. The faint touch of something like hay in the Eau de Toilette is much stronger in the Eau de Parfum version.

The leather aspect is not really any more noticeable to me, but the dry down is deeper and woodier. It's still not quite the girl with the whip, but nor is it the well-behaved young lady in the tasteful summer dress — it's somewhere in between.