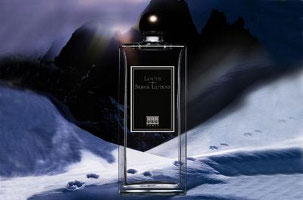 Serge Lutens is the darling of the niche perfumista world, and I have the highest admiration for his work. But Serge and me, we're kind of going through a rough patch lately. I was looking over the fragrances he's released since I started this blog, and I have to say that if this list represented the entirety of his output, my estimation of the line would quite different:

Cèdre (2005) — I can see why some people adore Cèdre, but it has never really grown on me.

Miel de Bois (2005) — probably my favorite of this group, but I'd be shocked if this sells. Most people apparently think it smells like urine.

Rousse (2007) — I really liked Rousse. Not quite so much as Miel de Bois, maybe, but it is higher on the wearability scale. Of all these, this might be the one I'd most like to own.

So now we have Louve, the "She-Wolf". It is the lastest to join the export line, and the notes include almond, rose petals, fruity notes, jasmine petals, amber, musk and vanilla powder. Louve starts out rather like my beloved Rahät Loukoum, with a cough syrup-ish cherried almond (although the cherry part is much more subdued in Louve). They never entirely part company, in fact, just as Rousse might have been a pared-down meditation on some of the themes explored in Lutens' spicy wood fragrances, so Louve might be the bare bones version of Rahät. It is blander, drier, considerably less foody, and stays closer to the skin. The dry down is the softest of almond skin scents, with honeyed musk and a dusting of powder.

Louve might be the most accessible fragrance from Serge Lutens since 2003's Clair de Musc. It is highly wearable, and there is nothing even slightly exotic or esoteric about it ("she-wolf" seems a misnomer for such an entirely tame scent). It does nothing for me at all — to my nose, it is rather as if they took out all the good parts of Rahät and then added some baby powder — but serious almond fans might find it a winner. Do comment if you love it.

I still haven't smelled the new Sarrasins. Maybe it will be the one to knock my socks off...