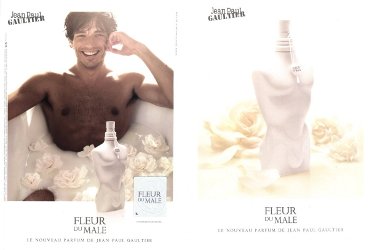 Reader, have you at times inhaled
With rapture and slow greediness,
That grain of incense which pervades a church,
Or the inveterate musk of a sachet?*

...asks Charles Baudelaire in his poem Un Fantôme. Knowing NowSmellThis readers, I’m sure the answer is a resounding “Yes!”

The name of Jean Paul Gaultier’s new men’s fragrance Fleur du Mâle (Flower of the Male) was inspired by the title of Baudelaire’s collection of poems — Les fleurs du mal (The Flowers of Evil). I don’t know if Gaultier’s research team studied the poems (or simply loved the title) but Les fleurs du mal is full of poems that acknowledge the power of scent, of perfumes, in this world. For Baudelaire, aromas inspire exultation, lust, creation (the poems themselves), happy and sad memories. One of my favorite passages is from the poem Le Flacon (The Perfume Flask):

There are strong perfumes for which all matter
Is porous. One would say they go through glass.
On opening a coffer that has come from the East,
Whose creaking lock resists and grates,
Or in a deserted house, some cabinet
Full of the Past's acrid odor, dusty and black,
Sometimes one finds an antique phial which remembers,
Whence gushes forth a living soul returned to life.

The debut of Jean Paul Gaultier’s Fleur du Mâle has been accompanied not only by references to poetry but by much talk (dare I say ‘mumbo jumbo’?) concerning the state of men’s lives in 2007. Léa Vignal-Kenedi, who heads the fragrance division of Jean Paul Gaultier, said in Women's Wear Daily: “Over the past 12 years [since the introduction of the original Le Mâle], many barriers have been lifted for men." She said men have more fashion and beauty choices and that Monsieur Gaultier “…wanted to speak of this blooming of today's masculinity, of joie de vivre, of happiness" (12/15/2006). Quoted in the Daily News Record, Vignal-Kenedi said: "Jean Paul wanted to demonstrate that men have a right to the same pleasures as women."

Gaultier produces a men’s makeup line, Le Beau Male, and may believe wearing le maquillage and sporting a flowery scent (Fleur du Mâle) provide men “pleasures” they have been denied in the past. The way I see it, men who had the courage (and desire) to do so, were never denied the ‘right’ to put on some eyeliner and drench themselves with Diorissimo. That being said, Fleur du Mâle’s advertising model is more ‘natural’ (hairier, less sculpted, and less uptight — he’s smiling) than Le Mâle’s posed sailors.

Gaultier and his advertising and marketing team have stressed the fact that Fleur du Mâle contains orange blossom. Men have always used fragrances that contain orange blossom, from classic Eaux de Cologne to modern day scents. Supposedly, what is different about Fleur du Mâle is the overdose of orange blossom in the formula. I’m betting most men reading this review are not ‘afraid’ of floral notes in scents but perhaps the target audience of such a big mainstream-designer launch is wary of floral accords taking center stage in their fragrances. It will be interesting to see how popular Fleur du Mâle becomes.

Like Le Mâle (1995), Fleur du Mâle was designed by Francis Kurkdjian; it contains petitgrain, orange blossom, a fern/fougère accord, and coumarin. Fleur du Mâle opens with the delicious scent of bitter orange leaves — vibrant and almost woody. Orange blossom? You smell it from start to finish and it’s a soft, natural-smelling orange blossom. Fleur du Mâle’s fougère accord is more mossy than herbal and the fragrance’s dose of coumarin smells like sugar cookies in fresh straw baskets. The development of Fleur du Mâle is seamless and the scent is rather linear.

While Le Mâle seems made for winter, Fleur du Mâle has the aura of spring. Smelled side by side, there are moments during each scent’s development when they are momentary twins — though Le Mâle has sharper edges than Fleur du Mâle. Fleur du Mâle is less powerful, less complex, less spicy, and less “harsh” than Le Mâle so it requires less of its wearer (while testing these two fragrances it’s been a big commitment to say to myself in the morning: “I’m wearing Le Mâle today. All… day...”) 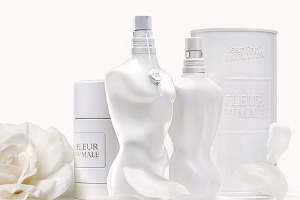 Fleur du Mâle brings to mind orange groves in bloom, glamorous black-and-white publicity stills, easy living and happy endings — yes, Hollywood, circa 1940. Fleur du Mâle’s languorous aspect, its dreaminess and sensuousness, would have suited Gary Cooper, William Powell and Laurence Olivier to a T — those men wore makeup on a regular basis and took their “right” to all pleasures for granted.