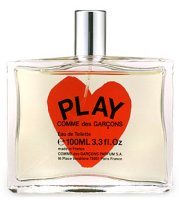 I'm not good at making "best of" lists. As soon as I put one thing on a list, I remember something else I should have included, and narrowing down is not an easy task (I've been working on a post called "100 Fragrances Every Perfumista Should Try" for over six months now). But Comme des Garçons would surely make a list of my favorite perfume houses, and when they release something new, I want to smell it.

Play, their latest release, looked promising. The concept for the Play line of clothing, introduced in 2003, is supposed to be "design by not designing", a good fit with the subversive ethos of the brand, and the logo on the Play fragrance bottle, designed by Filip Pagowski, is appropriately simple but fun.

Play opens on heavily peppered and spiced citrus. The sea notes join in shortly thereafter and soften everything up, after that, it smells like your basic men's aromatic-aquatic aftershave. The far dry down gets nicely warm and earthy-mossy, but still, it is only mildy more interesting than the Gillette Series aftershave gel my husband uses. It is perfectly pleasant, mind you, and entirely wearable, but perfectly pleasant and entirely wearable isn't what I'm looking for from Comme des Garçons. Perhaps the concept is so entirely esoteric that it goes right over my head, but I wouldn't have batted an eye if this juice had been launched as the latest in the Cool Water saga by Davidoff, and I should think it would sell just fine on the men's counter at Macy's.

Play is strike three for me (pardon the terrible pun), as I didn't much care for the Sweet or Guerilla series either. I am keeping my fingers crossed for the next one.

Tomorrow: one or another (or both) of the Comme des Garçons Odeur fragrances.