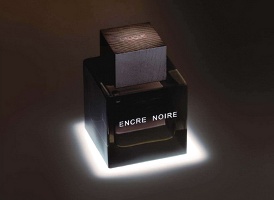 Early on in my career as a perfume addict, I made any number of buying-unsniffed blunders (my record was considerably worse than Kevin's 2 out of 3), and eventually swore off the practice entirely. Well, almost entirely. I try. But at least once a year, I fall prey to uncontrollable, spur-of-the-moment yearnings. In 2006, I actually did a little worse than I'd remembered: I bought Hermès Elixir des Merveilles (didn't like it, so swapped for a bottle of Eau des Merveilles) and a half-bottle of Sel de Vetiver by The Different Company (like it well enough, but not sure I would have purchased if I'd smelled it first). I might have even bought L'Artisan Dzongkha unsniffed, but I honestly can't remember. Ah well, that one I love.

I thought I might make it through all of 2007 unscathed, but a few weeks ago I caved on a bottle of Encre Noire by Lalique, a fragrance I've wanted ever since Victoria of Bois de Jasmin included it in her Best of 2006 article. As it turns out, Encre Noire is even better than I could have hoped. I love it, and I can see reaching for it frequently (and as we all know, the two aren't always related).

Encre Noire was developed by perfumer Nathalie Lorson, and features two kinds of vetiver (Bourbon and Haitian), cypress, cashmere woods and musk. It is dark and spicy and dirty, with none of the bright, clean feel of Guerlain Vetiver, and has an appropriately inky feel. At the same time, it is a very transparent fragrance. It wears like the sheerest possible veil of something black and gauzy; it doesn't bury you in roots and dirt like Frederic Malle's Vetiver Extraordinaire, or whack you over the head like Maître Parfumeur et Gantier Route du Vetiver.

Victoria says there is blackberry so I'm quite sure there must be, but all I smell is spicy vetiver and dark woods, more dry than not. I've seen complaints about the lasting power of the Eau de Toilette, but a few good sprays lasts most of day on me, albeit rather close to the skin by the final stages. The bottle is perfect. In the picture above it looks translucent, and it is, but unless you are shining a light directly on it, it looks more like opaque black glass, and the dark wengé wood cap is a nice touch.

A poll: what was the last fragrance you bought unsniffed, and was it a success?