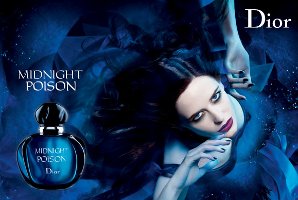 Midnight Poison is the fifth fragrance in the Christian Dior Poison saga, which began with the release of the original, now-iconic Poison fragrance in 1985 and continued with Tendre Poison in 1994, Hypnotic Poison in 1998 and Pure Poison in 2004. This year's entry was created by perfumers Jacques Cavallier and Olivier Cresp, and features notes of mandarin orange, bergamot, black rose, patchouli, amber and French vanilla.

The fragrance is fronted by actress Eva Green, best known for her recent starring role in Casino Royale:

Green said she dislikes what she considers strong "old lady" scents and often goes without fragrance, but noted she's smitten with Midnight Poison. "It's quite fresh compared to the other Poisons - it's younger, fresher, like the commercial," she said. (via Women's Wear Daily, 6/1/2007)

"Younger" and "fresher" aren't necessarily positive attributes in my book, but in the event, I found Midnight Poison much less young and fresh than Pure Poison (my vote for the dullest of all the Poisons).

Midnight Poison opens with a veritable roar of patchouli. It is that very clean patchouli that is in everything lately, and that only vaguely recalls the patchouli oil that once perfumed your local head shop. It stays on the scene for the duration, but the original burst does quiet, gradually revealing the citrus (juicy and mildly sweet) and a sheer floral blend dominated by rose. The base is what is left of the patchouli, plus some musky woods and a touch of amber. It is subtly sweetened by the vanilla, and as the florals fade, the slightest tinge of something fruity, but it stays more dry than not. In fact, it is surprisingly dry for something apparently geared towards the youth market.

Sephora describes it as "intense", but it isn't really, or at least, not once the top notes fade. It is appropriately dark for something named Midnight Poison, but it is not at all rich or heavy, and somehow, it never gets quite as sultry as I expected.

I don't love Midnight Poison, and to my mind, it doesn't even come close to the brilliant Hypnotic Poison. But it is well done. I like it better than anything else Christian Dior has come up with lately, and if a bottle were to rain down from the heavens, I'd wear it happily. Still, I won't be surprised if despite Eva Green's appraisal, many women find it insufficiently "young" or insufficiently feminine (a man could easily wear it) to wear. Do comment if you've tried it! 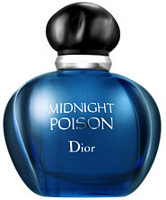