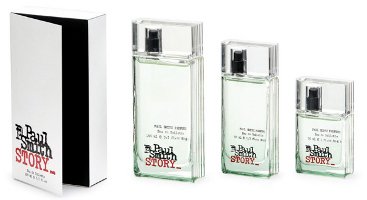 "I love the distinctive smell of antique books--of ageing paper and leather, the essence of time gone by, the imprint of wisdom and experience," he commented. "The pristine scent of fresh print, so cleanly intoxicating when you know you're the first person ever to open that book." (via cosmeticsint, 9/8/2006)

When I first smelled Story on a test card, I was less than impressed. Does the world need another fresh vetiver à la Guerlain Vetiver or Thierry Mugler Cologne? I tossed the card in my purse and went about my business. Surprisingly, given how light a scent Story is, the smell lingered in my purse for days, and you know, it smelled pretty darn good. Eventually I decided Story needed a real try on skin.

Story's top notes are just brilliant: the citrus is so bright and sparkling that it seems to jump off the skin, and the peppery-earthy vetiver, one of my favorite smells in the world, grounds it nicely as the citrus fades (sooner than I'd like, as always). The dry down is a sheer, lightly grassy green vetiver with a whisper of jasmine. It has a nice bite to it, but it is not quite as spicy as the Guerlain, and it is clean without being in the least soapy. There is also dry wood, and something that smells like rocks warming in the sun and which gives it, as Marina pointed out on Perfume Smellin' Things, some affinity with Terre d'Hermès.

Story is not a massively unusual fragrance, but it is massively likeable, and perfectly unisex. If you're wavering, the charm of the packaging may reel you in. I love the geeky model in the ad, and I love the use of the typewriter font (apparently from Smith's own Olivetti) on the bottle and box. The bottle itself is shaped like a book, with one side rounded like a book spine and the other side ribbed to represent the pages. None of it really resonates with the fragrance itself (try as I might, I can't smell anything like "vintage book" in Story), but it is cleverly done. 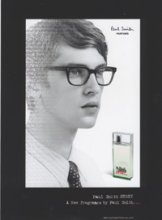