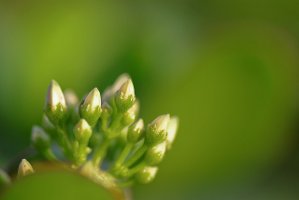 Blech. Despite being born a May baby, I have never been a fan of spring. I'm sure it's different in the other parts of the world, but every year, people above the 39th parallel in Europe and North America stand on street corners at this time of year, leaning at a 75 degree angle into gusting drizzle, and insist: "It wasn't like this last year!" Trust me, it was. The mud, the wind, the Easter snow or hailstorm, the false hope of that one giddy day near April Fool's when the sun shone and the warm breezes blew, like in a laundry detergent commercial, before the rain and gray chill returned — it all happened last year. I am not a pessimist. It is merely that I believe in the motto of mothers everywhere: let's not get worked up here. Crazed displays of Birkenstock sandals and patio furniture will only end in tears. I support measured celebrations of spring's small pleasures. For one, it is ramp season. Perhaps you have received your tax return. The road salt has melted away and you can go to 2D movies without being subjected to aliens, robots or robotic aliens. And it is time for some of your freshest, prettiest, newest fragrances to grace the air.

Composing a Top 10 for this most uncertain of seasons, I have tried not to dwell on lost favorites or the flood of recent scents I've missed. Jean Patou Vacances, Gobin-Daudé Sève Exquise, and L'Artisan Jacinthe des Bois are all gone and it somehow felt irresponsible to include them in the list. I have vintage samples of the many spring classics that have been damaged or ruined by reformulation — Balmain Vent Vert, Caron Violette Précieuse, the silver fluidity of Diorissimo, the mysterious smoky-green of Worth Je Reviens, the original Dior Fahrenheit's honeysuckle-and-wet-blacktop — and I use them sparingly and despairingly. I have not tried MDCI Un Coeur en Mai, Byredo La Tulipe, ElizabethW Magnolia or CB I Hate Perfume Wild Pansy and am trying to convince myself that I don't need to do so. With no further excuses, my Top 10 of Spring:

Parfums de Nicolaï Le Temps d’Une Fête: This perfume seems to me like Patricia de Nicolaï's fusion of two classic florals by her mentor and uncle, Jean-Paul Guerlain: Chamade and Chant d'Arômes. There is a nod towards the lush, fruity hyacinth and the powdery-sticky pollen feel of the former, while Le Temp's base has some of dry warmth of the moss-vetiver dry down in vintage Chant d'Arômes, which reminds me of spring soil. It is a perfume that perfectly mirrors the duality of the season: I feel both exhilarated and a bit stoned when I wear it, and have to be careful not to walk into the path of on-coming traffic.

Guerlain Après L’Ondée: Piercingly beautiful any time of year, Après is another Guerlain that almost defines late spring, with its perfect meringue of rain-washed violets, fresh anise, and the creamy stationery-paper-smell of heliotropin. Tender, sad and as fleeting in Eau de Toilette as its lovely name suggests, it is one of my very favorite fragrances.

Hermessence Rose Ikebana: Nothing earth-shaking or heart-breaking here — just a darned pretty scent in a pretty pink bottle (with optional pricey, if pretty, leather holder in red). Bit of a no-brainer for spring, really: peony, fresh rose, lots of tart rhubarb and a touch of vanilla honey.

The Different Company De Bachmakov: It is hard to forgive a fragrance that can't rise up to meet the flight of fancy of its press release, no matter the dizzying, thin-air heights to which the copy writers or art directors ascend. Faced with translating what was no doubt a mystic, Sibylline brief into actual chemicals, the unsuccessful perfumer comes up with a hodge-podge of notes that don't coalesce into the abstract whole the concept required. De Bachmakov is not such a fragrance. It is almost more like imagistic poetry than standard perfumery. Somehow, perfumer Celine Ellena got it all in there, the whole rambling, terribly serious story about Thierry de Baschmakoff’s Russian ancestry and the Année France-Russie: the journey across sun-lit expanses of nothing, green buds pushing through the snow, chilled vodka, the fatalism and generosity of the Slavic soul, the winds scraping the chalk and rocks of Siberia. It's weird, I have to say, and yet it works and wears very nicely in early spring.

Honoré des Prés I Love Les Carottes: Very, very carrot-y. Accented with a dry iris, orange juice, benzoin, vanilla and something that must be unlisted nutmeg — but yes, it's mostly carrots. (Surprise!) A strangely comforting gourmand.

Prescriptives Calyx: Prescriptives has always advertised this as "the exhilarating fragrance". It opens with green, sparkling citrus and tropical fruits (guava, passion fruit and mango) and the burst of that start is indeed wild and cheerful. Despite the crisp citrus and the cologne-ish lasting power, Calyx is rather sharp at the beginning and for me it gets a bit too intensely green and sneezy with lily and cyclamen aldehyde for the heat of summer. Instead, it is perfect for those days in spring when you need to be reminded that summer will inevitably follow early promise. Model yourself on Calyx's nose, Sophia Grojsman, who said: "Sometimes when I feel lousy I spray it on and I perk up immediately." (via Women’s Wear Daily, 9/4/1992)

Le Labo Iris 39:  Almost as much about patchouli as it is about iris, this is a dirt-caked, rooty, radish-y sort of fragrance. With a small squeeze of lime and some kick from the ginger and cardamom, it smells raw, but nevertheless has the careful arrangement and suave understatement of an amuse-bouche at a good locavore restaurant. Underrated.

Ormonde Jayne Frangipani Absolute: The Ormonde Jayne website has been promoting Osmanthus and Champaca for spring, and while I can't argue with those choices, I love Frangipani at this time of year. I just bought myself a bottle with the Easter discount. Both bright and soft, this is a much fresher presentation of frangipani than the usual tropical beach oil stuff. As Robin so aptly writes in her review, it is "like a greenhouse right after the flowers have been watered, with just the right number of windows left open".

Christian Dior Dune: It isn't warm enough to leave behind all our orientals, and with its fresh, quiet opening of broom and what is apparently carrot seed¹, Dune is ideal for the season. The base is rich and opaque with vanilla and chocolatey amber, but somehow the musks save it from being too heavy or sweet. Yesterday I got an erroneous pump of almond syrup in my iced tea-lemonade at Starbucks and the dissonance reminded me to include Dune in my list. The scent is a perfect fit with its transparent, pale orange bottle and is a little oasis of oddity at the Dior counter.

Givenchy L'Interdit: You know, I thought the Givenchy Les Mythiques collection of re-issues did not get the attention it deserved. There was not a real dud in the bunch, many were great and all of the sprucing up was respectfully done. There they stood, in their new frosted glass bottles, broad-shouldered in a sea of awful Very Irresistible and Pi flankers. With the exception of Organza Indécence, they quickly disappeared from retail stores, as you might expect them to do, if you're as jaded as me. L'Interdit is a classic spring bouquet perfume, inspired by Audrey Hepburn, reassuringly warm and natural and yet also old-fashioned and full of aldehydes, lactones and other miracles of science. Givenchy III, from the same collection, is also an excellent choice for this time of year.

1.  The carrot seed is not from Dior's released note list, but was identified by Luca Turin in Perfumes: The Guide.

Note: image is [Untitled] by titanium22 at flickr; some rights reserved.