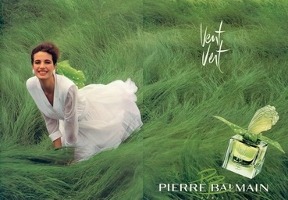 Just when I was worried spring would never arrive, we are having a gorgeous, sunny day, almost warm enough for shorts. To celebrate, I am wearing Balmain's Vent Vert, the classic green floral fragrance created by Germaine Cellier and released in 1947. Like just about everything else, this was "reworked" to appeal to modern sensibilities; the reformulation was done by perfumer Calice Becker, and I believe the relaunch was in 1990. The notes for the new version are greens, orange blossom, lemon, lime, basil, rose, galbanum, lily of the valley, freesia, hyacinth, tagetes, ylang-ylang, violet, oakmoss, sandalwood, sage, iris, amber, and musk.

Vent Vert starts out a strong, bitter, slightly perfume-y green. After a few minutes the bitterness calms and the citrus notes and orange blossom take the stage, later still, the citrus notes are replaced by the other florals. Throughout, it retains a strong undertone of crushed stems, leaves, and grass, just slightly bitter and dry.

It is fresh and light, a summery meadow kind of thing, very beautiful, very calm. The far dry down is simply lovely, with just a hint of oakmoss, and just before it fades away I can make out the iris and sandalwood as well. Happily for me, I don't smell any amber. I have the Eau de Toilette, and the lasting power is reasonable but not spectacular.

The original version of Balmain Vent Vert is said to be far superior, and last year I finally bought a vintage bottle from ebay. Of course, it is hard to say how accurately it represents the "real" original, given that the bottle I purchased must be well over 10 years old, and it is likely that some of the ingredients had long since been replaced by cheaper alternatives by the time my particular bottle was produced.

At any rate, I suppose it is heresy, but I prefer the new version. The old is more uncompromisingly green and bitter, and there is a darker edge to the florals. It does, however, seem more in keeping with Germaine Cellier's other perfumes, such as Bandit and Fracas, which tend to have a disquieting effect.

Update: I recently had the chance to try the original version again, this time from another bottle. It was far superior to the bottle I had purchased on ebay, and I liked it much better. It is still so different from the reformulation that they might as well have been given different names.