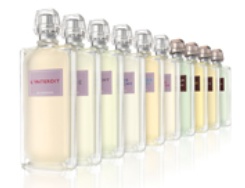 Givenchy will celebrate their 50th anniversary as a fragrance house with the launch of Les Mythiques, a set of 10 fragrances from the line's back catalog. Six of the scents are for women, four for men; five of the 10 were no longer on the market. The fragrances are:

Le De ~ originally launched in 1957. "Spring-like high notes of lily of the valley and fresh coriander give way to the luxurious indulgence of Arabian jasmine, Bulgarian rose and ylang-ylang. The lasting scent is a sumptuous and persistent blend of warm sandalwood and lingering incense." (quote refers to the new version, and is via Harrods)

L’Interdit ~ Created for Audrey Hepburn and launched in 1957 at the same time as Le De. The spicy floral fragrance, originally developed by perfumer Francis Fabron, was last updated and relaunched in 2002. Notes include aldehydes, peach, violet, rose, jasmine, amber, vetiver.

Vetyver ~ another men's fragrance from 1959. "Vetyver was composed in 1959 as Hubert Givenchy's personal fragrance. Evoking a thick, deep forest, the essential oil from the vetyver root qualifies this regal scent as the most masculine of all the luxury fragrances. First impressions are created by top notes of woody vetyver and fresh, tart bergamot, and are later affirmed with subtle spice of coriander. The lasting effect of the vetyver fragrance is warmed with sensual notes of rich sandalwood." (quote refers to the new version, and is via Harrods)

Eau de Givenchy ~ From 1980, described by Givenchy as "...a basket of fruits and flowers", and one of my own long-time favorites.

Insensé ~ An "amber woodsy floral" for men from 1993. The original version was developed by perfumer Daniel Moliere, and had notes of black currant, mandarin orange, basil, magnolia, lily of the valley, geranium, musk, balsam fir and sandalwood. (quote and notes via Women's Wear Daily)

Organza Indécence ~ a woody-spicy fragrance from 1999, with notes of jacaranda wood, cinnamon, amber and patchouli. The perfumers for the original were Jean Claude Delville and Norbert Bijaoui.

The Givenchy Les Mythiques fragrances are packaged in newly designed 100 ml bottles, with prices ranging from $75 to $109. Look for them in October. (via cosmetiquemag.fr, osmoz, madame.lefigaro.fr, Women's Wear Daily).