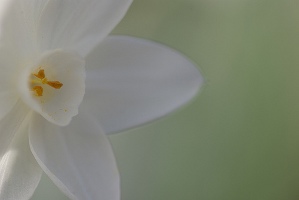 When I say Parfums de Nicolaï Le Temps d'Une Fête centers on narcissus, some of you might decide right away it's not for you. So often narcissus spells a crisp, virginal scent better suited to a girl taking her first communion than a full grown woman with a taste for gin. But take a few sniffs, and you might change your mind. Instead of a cloying, sexless flower, Le Temps d'Une Fête smells of warm narcissus cloaked in mossy, animalic notes. Any girl taking her first communion in it would raise suspicions of having spent more time in the hayloft with the stable boy than at home with her rosary.

The Parfums de Nicolaï website lists Le Temps d'Une Fête's top notes as galbanum, opoponax, and tree moss; its heart as daffodil and narcissus; and its base as sandalwood, patchouli, and oak moss. The house's perfumer and co-founder, Patricia de Nicolaï, created it in 2006. (Note: the website is as rinky dink as the house's perfume packaging. I clicked on the link to the Parfums de Nicolaï home page only to find it blank. But if you root around in Google, you can find a link to something deeper in the website and access the site's content that way.)

Le Temps d'Une Fête opens with a sweet, green, diffusive fragrance that might have a little neroli tucked in with its galbanum and sharp tree moss. It's not the traditional bright citrus opening of many perfumes. Within a few minutes, the fragrance's narcissus and hyacinth gain volume, giving the feel of spring. Rather than the rain-washed spring of Guerlain Chamade, it's a warm, earthy spring. Instead of standing in the garden, you're in the greenhouse among moist trays of plant starts in wooden trays with a vase of cut bulb flowers nearby. The fragrance is rich and thick.

Parfums d'Histoire Tubéreuse 3 L'Animale tries Le Temps d'Une Fête's trick of warming an emphatic white flower by dressing it in an olfactory mink stole. But to me, L'Animale's result is murky and indistinct, like an artist who keeps swishing new colors together on his palette. Although each color is gorgeous on its own, together they muddle. In Le Temps d'Une Fête, the trick works. The blend feels natural — classic, even — and the sum is definitely greater than its parts.

Le Temps d'Une Fête isn't subtle, at least not until hours have passed and its sweet sandalwood and mossy dry down are all that's left. It's a fragrance that calls attention to itself and so demands a little extra attention to how you dress. Yellow is tough to wear, but I think a dress the color of the sun on the head of a golden blonde toddler would complement Le Temps d'Une Fête perfectly. Le Temps d'Une Fête would also go well with a vibrant 1940s rayon print on a swishy, bias-cut dress, or, in winter — and I think it would hold up great in cold weather — grass green velvet.

I bought my bottle of Le Temps d'Une Fête at the Parfums de Nicolaï store on the rue de Grenelle in Paris, just a stone's throw from the Bon Marché. Reason told me to choose the 30 ml bottle, because, really, have I used more than 30 ml of anything in the past five years? Instead, fearing for all the fragrance's moss that could be doomed by IFRA rules, I sprang for the 100 ml bottle. After wearing it a few weeks, I'm glad I did. I bet I use every drop.

Note: top image is (untitled; from greens set) by titanium22 at flickr; some rights reserved.