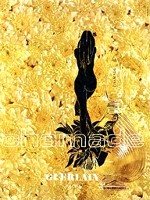 To me, Guerlain Chamade Eau de Toilette is spring in a bottle. Spraying it is like encountering a bank of daffodils on a grey day and realizing birds are chirping and winter is on its last legs. Spraying Chamade you can practically see a bouquet of purple hyacinths, stems and all, materialize, complete with a hummingbird whirring in for breakfast. While snow pummeled the East Coast, it has been unseasonably balmy here, and crocuses splatter across lawns. It's Chamade season.

Jean-Paul Guerlain created Chamade. It launched in 1969, and in The Book of Perfumes, John Oakes writes that Guerlain spent seven years and made more than 1,300 trial versions before he perfected it.1 Guerlain's website calls Chamade an "oriental fruity floral" and mentions cassis buds, hyacinth, and Guerlinade as its notes. Jan Moran's Fabulous Fragrances lists Chamade's top notes as greens, galbanum, bergamot, hyacinth, and aldehydes; its heart as rose, jasmine, lilac, and clove; and its base as vanilla, amber, benzoin, sandalwood, and vetiver.2

If you've read anything about Chamade, you probably know that a chamade is the name of a pattern of drumbeat the French troops used back in the day to communicate retreat. It can also mean the pattering of heartbeats. It's a beautiful word, chamade, but I'm not sure I want my perfume to signal the need to retreat. Fortunately, Chamade's fragrance isn't likely to drive anyone away.

The first burst of Chamade on skin is tart and grassy, then quickly sweetened with hyacinth and juicy black currant. Yes, it has the loft of aldehydes, but these aren't the classic Chanel type of sneezy aldehydes some people don't like. Instead, they're clean and soapy. The green fades but doesn't entirely disappear as it makes room for Chamade's sweet, floral heart. The rose is fresh and cool next to the fruity lilac. The black currant persists, but is spicier now, like an underripe plum.

Chamade's drydown is more sophisticated than its cheerful, gamine beginning suggests. I definitely smell vanilla and sandalwood, but I wouldn't have guessed it is Guerlinade, maybe because of all the spring-like green and crisp fruitiness leading into it. Chamade's dry down smells Parisian — warm, aware of its pedigree, and like it has smoked a few cigarettes in its time. But still vernal. The Eau de Toilette initially has strong sillage but shrinks to the skin quickly, where it wears for a good half a day.

Scentsa lists some of Chamade's admirers as Audrey Hepburn, Glenn Close, Princess Grace, and — my favorite — Phyllis Diller. I think it would also suit someone relatively young but with a classic style, like Anne Hathaway, or someone with a powerful Goth streak and a sense of irony.

This review is based on a bottle of Chamade Eau de Toilette I bought about three years ago. It's the kind that comes with the gold, refillable canister with circles cut out of it (see above left). Guerlain Chamade is also made in extrait (see above right) and Eau de Parfum. For information on where to buy it, see Guerlain under Perfume Houses.