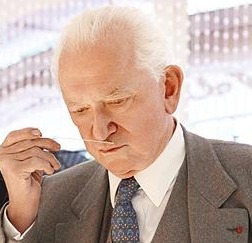 Jean-Paul Guerlain is the grandson of Jacques Guerlain, and is responsible for many of the Guerlain brand's modern classics, starting with Vetiver in 1959. He began learning perfumery as a teenager:

At 16, Jean-Paul Guerlain lost his sight, dropped out of school, sat around the house. The grandfather said `You have to get out, do something.' He brought Jean-Paul to his factory and began teaching him to smell. The boy grew up to become one of the world's greatest noses. His vision has been restored after several operations, but his nose remained supreme.1

Jean-Paul Guerlain officially retired in 2002, but has continued to create perfumes for the house of Guerlain.

Perfume is the most intense form of memory. If a perfume stinks, it's a disaster when she turns off the light. — From Scent journey: Guerlain's 180th birthday at Elle Canada.

Our style is to never cheat on quality, to never be vulgar. We are always sophisticated. The one thing my grandfather taught me is the taste of quality. — From "Guerlain moves beyond its traditions" at Women's Wear Daily, 9/13/1985.

See all articles on Now Smell This tagged Jean-Paul Guerlain.

Listen to a 2002 NPR profile of Jean-Paul Guerlain by Susan Stamberg.

Jean-Paul Guerlain was shot during a robbery at his home on the day Guerlinade was launched.

1. Via 2002 NPR profile of Jean-Paul Guerlain by Susan Stamberg (see link above).