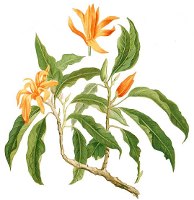 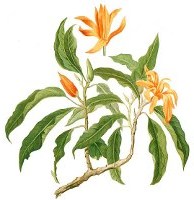 Champaca was one of my early favorites from the Ormonde Jayne line. According to the Ormonde Jayne website, the champaca flower is related to the magnolia. The champaca tree is also called the "Joy perfume tree", as it is said to be one of the primary notes used in Jean Patou Joy. It is also found in Christian Dior J’Adore, and is one of the ingredients used to make Nag Champa incense. The notes for Ormonde Jayne's Champaca fragrance are neroli, pink pepper, bamboo, champaca, freesia, basmati, myrrh, green tea, and musk.

Champaca starts with dry neroli and just a touch of pepper. After a few minutes, it smells almost eerily like basmati rice cooking on the stove, and in that sense, it is a foody fragrance, but it is far from the heavy, dessert-like fragrances that the term "gourmand" usually calls to mind.

The basmati slowly fades to a whisper and is joined by light florals and a true green tea note — something else I find rather rare in perfumery. After it dries down, there is a touch of resin from the myrrh. It is creamy, and just slightly sweet. The bamboo adds a nice woody undertone without any heaviness.

One of the things I adore about the Ormonde Jayne line, and Champaca is no exception, is that while the fragrances are composed of modern materials, the individual notes maintain an old-fashioned, pre-aldehydic kind of distinctness. These are perfumes for people who really like to smell things, and they don't appear to have been influenced by modern test marketing practices.

Champaca has a great deal of character, yet is light enough to wear right through the summer. I do not find it pretty in the conventional sense, but it is an unusually compelling and comforting fragrance. When I wear it, I tend to walk around sniffing myself compulsively.

And just in case any of you were wondering what to give me for Christmas, the picture just above shows the "Belle of the Ball" gift box, which includes 3 mini candles, the body lotion, bath oil, crème, and Eau de Parfum spray. It is available in all 7 of the women’s fragrances, and not to be greedy, but I will take one of each.

5 Perfumes for: Nerds
100 Fragrances Every Perfumista Should Try