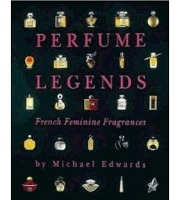 Michael Edwards is a household name in perfumery. He is the man behind Fragrances of the World (formerly known as The Fragrance Adviser, and now available in book form and online), a critically acclaimed guide for retailers, and the author of Perfume Legends, a standard work on the history of modern perfumery. While there's some controversy among perfume fans regarding the reliability of the (online) suggestions provided by the Fragrance Adviser, Perfume Legends is universally hailed as a must-have. Of course, good things come at a price, and at $130 US this book is no bargain. I've postponed my purchase for a long time, and ended up buying the (much cheaper) French soft cover edition, translated by Guy Robert. My review is based on the latter, but there's no real difference between the two.

What we have here is a reference book on fragrances that made a mark in 20th century perfumery. The selection is restricted to French feminine fragrances, but that hardly narrows it down (although the wonderful Youth Dew would have fitted perfectly in Edwards' list). The book features forty-five influential perfumes, ranging from Guerlain's L'Heure Bleue to Thierry Mugler's Angel, and all there is to know about them is squeezed in 300 pages. The word 'ambitious' wouldn't do this project justice: like all things in Edwards' home country Australia, everything about this book is impressive. The sheer amount of detailed information, the list of contributing experts, the quality of the photographic material, everything is produced to perfection. For the really challenging questions, Edwards interviewed those who were directly involved: Edmond Roudnitska, for instance, explains how he gradually simplified the structure of his compositions, and Sophia Grojsman talks about her fascination with Guerlain's Nahéma when they discuss her Yves Saint Laurent creation Paris.

Perfume Legends is a richly illustrated textbook, meaning that it's perfect for browsing through on a quiet evening. It's pleasing to the eye and well-organized, so it's ideal for quick reference too. I'm sure that many bloggers make good use of it; if you read it thoroughly, there's enough in there to make you a bit of an expert on modern perfume history. Although the author's focus in this book is on French perfumes, he frequently refers to other creations as well (Youth Dew is mentioned some five times in connection with other fragrances).

What I like most about Perfume Legends is something that sets it apart from all other reference books: it goes beyond a simple chronological account of "what happened when". It explores the complex relations between the creative process, traditions in perfumery, changing trends and markets, and new approaches in business. Perfumers and bottle designers tell us about their motives, their sources of inspiration, and how they were influenced by others; corporate brand managers like Chantal Roos were interviewed, who started playing an important role in the launch of new products from the 1970s onwards. Mind you, the story ends somewhere in 1992, and the industry changed considerably after that; nevertheless, it's important to understand those mechanisms if you want to know how today's industry works.

So now the question is: should you order your copy straight away, and spend the kind of money you'd shell out for that very special bottle of perfume? Or will it end up on your wishlist for next Christmas? My guess is that if you're reading this review, you're interested in perfume history; in which case, I'd say this is the only book you can't go wrong with. If your budget is limited, there are some good deals on Ebay every now and then; if you read French, I'd suggest to go for the French translation (entitled Parfums de Légende), which is really well-produced, and costs around $50 US. I'm not a fan of everything Michael Edwards ever wrote (I was really disappointed with his 1999 Fragrance Adviser, which I bought blindly), but I have yet to find a person who was actually not impressed with Perfume Legends.

Update: a list of the fragrances included in the book, by year...