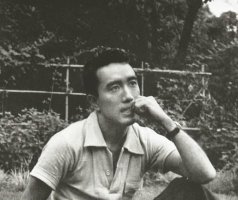 During early spring, while I was reading Michael Edwards’ Perfume Legends, I was struck by the number of ‘landmark’ perfumes of the early 20th century I had not smelled. I hadn’t bothered to seek out many of the old Guerlain, Caron or Patou perfumes because they were for women and I would not be wearing them — so why bother? My interest in these vintage perfumes was ignited by Perfume Legends; in the book, Sylvaine Delacourte, artistic director at Guerlain and one-time assistant to Jean-Paul Guerlain, was quoted as saying great perfumes, especially chypres, could be worn and enjoyed by women and men: “A great perfume appeals…to all human beings.”

Today, men are more open to floral and fruit notes in their colognes. Fragrance houses like Serge Lutens do not categorize scents as “masculine” or “feminine” but encourage people to wear the scents they appreciate. In Robin’s recent article Notes on perfume and context, she suggested perhaps the best way to try fragrances would be to put perfumes in plain glass bottles — that way, no information on the perfume name, perfumer, ingredients, design/perfume house, packaging or “inspiration” would influence our judgment of fragrances. To take away such “markers” would also take away gender clues.

I began my remedial perfume studies with Guerlain. I ordered samples of classic Guerlain scents (in Eau de Parfum and Eau de Toilette strengths); when I received the fragrances, I immediately covered their names with white tape and I began to wear the “unknown” perfumes one by one. At the end of my experiment, there were three perfumes that stood out as unisex (or verging toward unisex) to my “contemporary nose”; I peeled away the tape from the sample vials to reveal: Vol de Nuit, L’Heure Bleue, and Mitsouko. (I’ve worn Jicky for years so it was not included in my “testing.”)

Mitsouko was created by Jacques Guerlain in 1919 and contains bergamot, jasmine, rose, peach, oak moss, pepper, cinnamon, and vetiver. Mitsouko starts with beautiful bergamot and rose; the rose surrenders to peach fairly quickly and peach begins its long march to the finish (and is joined by pepper and vetiver which butch up the fruit). On my skin, Mitsouko’s overall aroma is of ripe peaches (cushioned on oak moss in a nest of vetiver roots) sprinkled liberally with freshly ground black pepper.

One can easily find fruit accords in modern men’s fragrances; I especially like green mango, grapefruit, fig, raspberry and plum. Peach is no more “feminine” than those fruit aromas, and I certainly prefer peach to the apple, pineapple, kiwi and melon accords I’ve encountered recently in men’s colognes.

As I wore Mitsouko, I felt it was a close-to-the-body scent, but many people told me, hours after application, how good I smelled. Among Mitsouko’s admirers was a macho straight man who wears ozone/marine colognes almost exclusively. He said: “Kevin, I might get a bottle of that, what is it?” I was ready for this question because I had created a new name for Mitsouko in case I was asked about it; I wanted no one to automatically categorize Mitsouko (and possibly dismiss it) as feminine. I considered calling Mitsouko “The Tramp” (Charlie Chaplin was one of Mitsouko’s famous devotees), but in our day, “tramp” usually means a hot-to-trot woman and not a vagabond, so I decided to use the name “Mishima” — what could be more macho than a weight-lifting, army-loving writer who committed seppuku?

Mitsouko has recently been reformulated by Edouard Fléchier to remove (much-maligned) oak moss from the composition. I have not smelled the reformulated Mitsouko yet but please comment if you have tried it. If you want to experience the “old” Mitsouko, you’d better buy it sooner than later. When I finally told Mr. Ozone-Marine the perfume he liked on me was Mitsouko from Guerlain and it was marketed to women, he said: “No way! I won’t wear it but I might get my wife a bottle.” I bet if I could have presented him with “Mishima” in a metallic bottle resembling the silhouette of a suit of samurai armor he’d be wearing Mitsouko today — none the wiser, and smelling great.