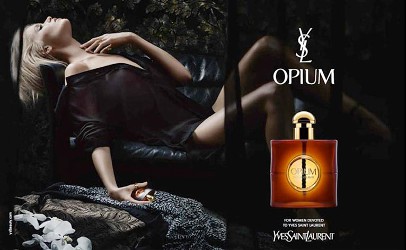 Few fragrances induce the instant love-it-or-hate-it response of Yves Saint Laurent Opium. Right now, you're probably either thinking, "Opium! I've had some of my most memorable nights wearing that perfume..." or "I can already feel the migraine coming on."

When Opium hit the market in 1977, women bought it by the gallon. Opium was so much more than a fragrance. It became an identity. Just as Chanel No. 5 showed its wearer as someone elegant and timeless (or at least trying to be elegant and timeless), the woman who wore Opium signaled that her life was rife with exoticism and secrets, even if she lived in a split level in the suburbs. The Yves Saint Laurent marketing machine fueled this image with print advertisements of mostly naked women surrounded by crimson and shadows.

Maybe the rush toward Opium was a reaction to stagflation and fuel rationing. Maybe it was a response to all the colonial hoo-ha surrounding the Bicentennial. Or maybe it was simply clever marketing. Although Opium stood out among the mid-1970s perfume launches — for instance, the fresh chypre Molyneux Quartz came out the same year, Dana Tabu and Estée Lauder Youth Dew covered the same ground decades before. For whatever reason, Opium was the right fragrance at the right time, and it became a cultural marker.

Jean-Louis Sieuzac, the nose behind Christian Dior Dune and Oscar de la Renta Oscar, created Opium. In Fabulous Fragrances, Jan Moran writes that Yves Saint Laurent hired a ship, the Peking, for Opium's launch and stuffed it with Oriental-themed decorations, including a thousand-pound bronze Buddha surrounded by "mounds of white cattleya orchids". Truman Capote was at the ship's helm. YSL was determined that Opium would be a success.

On my skin, Opium Eau de Toilette opens with an aldehyde-boosted wave of bay leaf and citrus, but it doesn't stay there long. Soon clove, carnation, cinnamon, and pepper hit my nose, only barely softened by jasmine and ylang ylang. A tangy herbal quality — tarragon, maybe? mint? — lightens the scent. In the extrait, the aldehydes are less perceptible, and the scent transitions smoothly from bay to a spicy floral heart. The rose is more prominent in the extrait. But Opium is really about the dry down. Here, every trick in the Oriental fragrance's book is played: I smell wood, balsam, and resins galore, all steeped in incense, labdanum, and a honey-tea that reminds me of tobacco.

Opium launched a storm of imitators, including Estée Lauder Cinnabar, which some say was in the making before Opium hit the shelves. To me, Cinnabar is nice, but friendly and predictable, and I'm too soon done with it. Opium adds a few surprising notes to the formula, such as the tarragon/mint and floral balance that engage me more.

I don't know what I'd think of Opium if I smelled it today for the first time. Opium is big and potent. It's Cher in full Bob Mackie. I love it, and yet I can barely stand to wear it. My handicap is that, along with Chanel Coco, Opium infiltrated my 1980s. When I smell it, I think, "Oh, Opium," and the magic is over. It is forever linked to another life. I'd love to hear from people who only came to know Opium recently. What does it smell like to you? Do you like it?