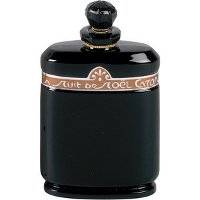 This past weekend on impulse I bought a Christmas tree. I thought I might skip it this year, but as I wheeled my cart of groceries home I remembered the German couple down the block who alway sell crisp Noble firs from their driveway. If the couple isn’t home, you take the tree you want and slip your money through their mail slot. I chose a small, sparsely limbed fir (why do people always call them “Charlie Brown” trees? I prefer to think of them as “Napoleons”) and spent the evening decorating it with ornaments while Nat King Cole serenaded from the stereo. I wore Caron Nuit de Noël Extrait, of course.

Ernest Daltroff, founder of Caron and its nose for 37 years, created Nuit de Noël in 1922. The Caron website lists its notes simply as “jasmine, saxon moss, and amber.” I don’t doubt Nuit de Noël has jasmine and amber, though neither note shines. What I mostly smell is the saxon moss, more commonly known by its French name “mousse de saxe.”

Mousse de saxe is a base Daltroff used in a number of his fragrances, but it commands front and center in Nuit de Noël. Mousse de saxe is difficult to describe. It has an opaque, velvety, almost powdery texture, but it smells a little like leather, oakmoss, crushed green stems, walnut shells, motor oil, and a fennel seed or two. Add some wood and a little brightness up top, and you get Nuit de Noël.

Nuit de Noël Extrait stays viscous and nut-brown, glowing slightly from the green veining through it, and changing little through the six hours or so it lasts on my skin. I’ve heard the same complaint about Nuit de Noël I’ve heard about Guerlain Vol de Nuit — that it’s boring. True, Nuit de Noël doesn’t shock or challenge (although it might not be easy to wear if you aren’t used to retro-smelling fragrances). But like Vol de Nuit, it smells “basic” in a natural, almost inevitable way. Despite being basic, it doesn't smell common at all.

I have only a few drops of Nuit de Noël Eau de Toilette, and to me it is true to the Extrait, although more rosy and airy than the thick Parfum. My sample is probably five years old.

I’d like to believe Nuit de Noël is what the Tabac Blond girl dabs on when she doesn’t need to be fierce. She’s at home alone, warm and happy on the couch with a quilt and a novel. A fire crackles in the fireplace, and something good braises in the oven. Sure, it’s a domestic scene, but she still wears vermillion lipstick.

Caron Nuit de Noël is sold in Extrait de Parfum and Eau de Toilette in perfume boutiques, selected department stores and online discounters. The 28 ml Parfum comes in a killer black flask with a faceted stopper and a gold foil band running around its top with “Nuit de Noël” in a deco font (Nordstrom has it at the moment for $230).