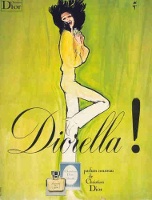 Continuing with what has apparently turned out to be Edmond Roudnitska week, today I am wearing Christian Dior Diorella, said to be Roudnitska’s personal favorite among his own creations. It was released in 1972 and features lemon, greens, basil, bergamot, melon, jasmine, rose, carnation, cyclamen, oakmoss, vetiver, musk, patchouli.

Diorella is often called the "sister scent" of Eau Sauvage, but Roudnitska disagreed. Diorella, he said, was descended from Eau Fraîche de Dior (1952), although both Eau Sauvage and Diorella could also be called the grandchildren of Diorissimo (see Michael Edwards, Perfume Legends, p. 160). It is not for mere mortals such as I to argue with genius, and I have never smelled Eau Fraîche de Dior, but Diorella smells very much like the feminine version of Eau Sauvage.

The top notes are mostly citrus and greens; if sprayed, it is very perfume-y, the kind of perfumey that can stick in the back of your throat for the next hour. As it settles, it takes on heavy notes of over-ripe fruit. The fruits settle in turn (it is not overly fruity or sweet once it dries down), and are joined by the floral notes, although as in Eau Sauvage, it is hard to make out anything individually other than the jasmine.

It has the same lovely oakmoss and vetiver base as Eau Sauvage, and like that fragrance, it is fresh and summery, but the fruits and patchouli give it a deeper, more languid feel. And while it is more feminine than Eau Sauvage, to my nose it is not so feminine that a man couldn't wear it.

The Eau de Toilette is easily found online. I do not know if it was ever made in a heavier concentration, if you know, please comment!