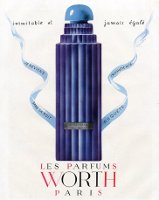 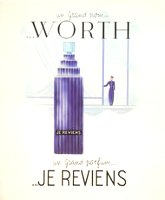 Of all the fragrances crowding shelves, relatively few smell truly like “perfume” to me. I don’t mean they’re necessarily what some people consider “perfumey” — emitting sneezy aldehydes and high-pitched florals — but that these perfumes don’t try to tell a story or mimic a bouquet or evoke a place. They are, simply, abstract olfactory compositions that build something distinct and whole from their pieces, something you recognize at once. Worth Je Reviens is one of those perfumes.

Perfumer Maurice Blanchet developed Je Reviens in 1932. Je Reviens, over the years, moved from prestige to mass market status; it was reissued in the prestige category in 2004 as Je Reviens Couture.1 Susan Irvine, in Perfume: The Creation and Allure of Classic Fragrances, attributes the original name to Napoleon’s instructions to Josephine, “Je reviens en trois jours, ne te lave pas.”2 (Hardly a recommendation for a spring-like aldehydic floral fragrance, if you ask me.) Its notes include jasmine, orange blossom, ylang ylang, aldehydes, narcissus, jonquil, violet, sandalwood, vetiver and musk.

Je Reviens is plainly Je Reviens, whether it’s the drugstore variety, the Je Reviens Couture, or vintage Eau de Cologne. It’s a fresh, stemmy green floral that hums with narcissus and rose. Its green isn’t the sharp galbanum of fragrances such as Carven Ma Griffe, but is a gentle lit-from-within green, like light through a jadeite lampshade. A pinch of carnation keeps the fragrance lively, and orange blossom infuses it with youthful innocence. Despite the notes I’ve listed, really Je Reviens comes together as its own particular flavor, as if the perfumer mixed blues and yellows we all know and invented a green that had never been seen. A bare, sweet smokiness, almost like incense, trails through it.

However, each version of Je Reviens has its own feel and is likely to have different fans. The drugstore variety is thin and sharp and a little more grassy than the vintage or Couture versions. The Parfums Worth website calls it a “subtle variation” of the classic version. The good news is that 100 ml bottles of the Eau de Toilette can be had online for as little as $12. The bad news is that for value you might rather spend the money on a tuna melt and People magazine. The Eau de Toilette would probably make a nice linen spray.

Je Reviens Couture is purported to smell closer to the original. I can’t say if this is true, since I don’t know what my vintage bottle smelled like new, but Je Reviens Couture is much more ladylike and demanding than my vintage Eau de Cologne. The Couture is packed with aldehydes, clean musk and fresh orange blossom. It has respectable sillage and wears five or six hours on me. Oh, and the juice is windshield-cleaner blue.