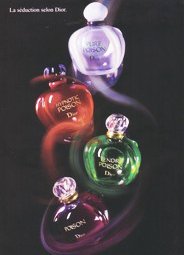 Poison was launched by Christian Dior in 1985. The fragrance was intended to revitalize the brand's fragrance offerings, which had taken on a distinctly old-fashioned aura — before the release of Poison, the brand's biggest seller was the 1947 fragrance Miss Dior.

Poison represented a break with Dior's past in more ways than one. It was considerably more expensive than the fragrances which preceeded it in the Dior line, and had a more modern, youthful image. The name, however, is what caused most of the early controversy. Maurice Roger, the president of Parfums Christian Dior, noted at the time:

Finally, I realized you can afford to be a little controversial as long as your product is noble. There are some 56 launches a year in Europe and some 35 in the U.S. That's a lot of noise. You have to be exceptional to break through that wall. The name of a perfume is like the title of a book or the cover of a magazine — it has to be attractive and make a difference. (Women's Wear Daily, 6/21/1985)

Of course, what Roger called "a lot of noise" back in 1985 has now reached deafening proportions, but at any rate, his gamble paid off handsomely. The juice itself was created by perfumer Edouard Flechier, and the heady cocktail includes notes of orange blossom, honey, cinnamon, coriander, pepper, plum, rosewood, rose, tuberose, wild berries, cistus labdanum, carnation, jasmine, cedar, sandalwood, vetiver, musk, vanilla, heliotrope and opopanax.

Marlen wrote an appreciation of the original Poison last year, so I won't go into a full scale review. Given that my favorite perfumes at the time were the comparative lightweights Eau de Givenchy and Prescriptives Calyx, it is probably no surprise that I hated Poison when it was released. While I don't exactly adore it today, I have made my peace with it: it is far, far easier to appreciate its good points now that everyone on earth isn't wearing 2 sprays too many. Whatever you think of Poison, it is safe to say that it has now reached iconic status, and it seems fitting to give Flechier the last word:

Today, I do not think it would be possible to go as far as we did with Poison. The new perfumes are tame by comparison. I think that's why Poison has become a classic, because all the classics have an extreme dosage of some component. Consider Chanel no. 5 (1921), for example, with its overdose of aldehydes; Vent Vert (1947) with its jolt of galbanum; or Shalimar (1925) with its signature of ethyl vanillin. (quoted in Perfume Legends by Michael Edwards, p. 227)

It is almost unimaginable today to think that Christian Dior wouldn't have a Poison flanker on the market within the next year or so, but times were different then, and it was 1994 before they followed up with Tendre Poison. Also developed by Edouard Flechier, Tendre Poison was meant to appeal to a younger audience. The notes include galbanum, mandarin, freesia, orange, honey, vanilla and sandalwood.

Tendre Poison starts with a blast of galbanum floating over very sweet floral and citrus notes, and for a few moments one might imagine that it is going to pay tribute to Poison in more ways than one. But once it settles, Tendre Poison is, well, "pretty", and has nothing like Poison's in-your-face arrogance. Tinged with green and amply sweetened with vanilla honey, Tendre Poison has a simpler floral character, with none of the heavy spices or dark oriental underpinnings of the original Poison. It is lighter, greener and fresher than Poison, but all the same, it is not an ethereal or delicate scent: what it does have to say, it says rather loudly, and it does not strike me as a particularly youthful scent. Of the two, I prefer the first Poison.