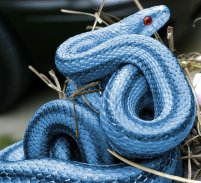 During spring and summer, the Northwest has some of the most beautiful and dramatic “blue hours” I’ve ever experienced — the lustrous sky turns every shade of blue, from chalk blue to blue-black. While wearing Guerlain's L’Heure Bleue fragrance for the first time, I went outside with my cat (who is blue himself) and experienced a blue hour; I sat under my second-story porch, behind a curtain of blossoming clematis vines that swayed in the cool breeze, their pink and blue, vanilla-scented flowers glowed like stars against the dark shiny leaves of the laurel hedge. The ornery blue jays had gone to nest and refused to participate in my blue reverie, but a robin “trio” sang soothing avian folk songs till dark.

The “blue hour” is the time between sunset and nightfall when everything seems tinged with blue. I’m a lover of the blue hour; in fact, I like the world best between twilight and dawn. I could easily keep vampires’ hours, since bright sunny days wear me out, wear me down and make everything seem too focused, exposed and raw.

I’ll spare you the oft-told tale of the creation of L’Heure Bleue (easily read on Guerlain's website) but I will say that people who have reviewed this perfume often find it “sad” and “melancholy.” I bet many of those people love the daytime, the sun, brightness and heat. To me, L’Heure Bleue is “quiet,” not sad, but I do find it “chilly” and a bit harsh, especially in its extreme dry-down phase.

L’Heure Bleue was created by Jacques Guerlain in 1912. Its “floriental” recipe includes: bergamot, aniseed, carnation, orange blossom, heliotrope, Bulgarian rose, tuberose, iris, vanilla and musk. (It was the first Guerlain scent to use aldehydes.) L’Heure Bleue appeared seven short years before Mitsouko’s debut but it smells as if it came from a different era, another world. Mitsouko lives and breathes. L’Heure Bleue seems frozen.

L’Heure Bleue starts off with a strange bergamot-aniseed-floral accord that smells like a fancy medicated cream. L’Heure Bleue’s medicinal edge is comforting to me. As a child I was constantly burning, scraping, cutting, and puncturing myself; I fell off my bicycle at least twice a week, many times embedding tarry pebbles in my knees. I loved the smells of the pink lotions and pearlescent creams my parents or doctor would use to clean and disinfect my “wounds.” (And, no, I did not hurt myself for attention; I was clumsy!)

During L’Heure Bleue’s development, I smell a hint of medicated rose. L’Heure Bleue’s tuberose does not smell sultry, but mentholated (tuberose in mothballs anyone?) L’Heure Bleue’s carnations seem withered, not dewy and fresh, and its orange blossoms “deaden” as you smell them, turning from fresh into waxen flowers. (Did Lily Munster wear L’Heure Bleue?)

L’Heure Bleue’s clinical aura and abstract floral accords make it perfectly acceptable for a man to wear. L’Heure Bleue in Eau de Parfum strength is far superior to the Eau de Toilette but apply this scent with a light touch to ensure its most handsome aspects. When I applied L’Heure Bleue liberally the first few times I wore it, it created a disturbing chemical ‘haze’ during the dry down that affected my mood as well as my nostrils.

If snakes exuded scent, L’Heure Bleue would be the perfect fragrance to waft from their sinuous bodies and yawning mouths.