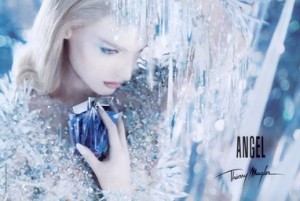 Thierry Mugler's Angel, like Yves Saint Laurent Opium or Guerlain Shalimar, is one of those perfumes that is so iconic, and so widely written about, that it's hard to think of anything new to say on the subject. But as was the case with Shalimar, I want to review a flanker, and it just seems wrong to talk about the flanker when you haven't talked about the original fragrance. So: some brief thoughts, a few quotes, but nothing like a real review.

Angel launched in 1992. It was the first fragrance from Mugler, who at one time was one of the bigger names in French fashion but whose house had by that time already started to decline; arguably he is better known today for the perfumes.1 Vera Strubi, president of Thierry Mugler Perfumes, noted that:

Angel is not the product of a marketing recipe. Angel surprises and intrigues people at the same time. It is so different that some find it shocking, but others become addicted to it.2

I, for one, found it shocking. Angel was, and is, a bestseller, so I surely must have smelled it at some point over the course of the 1990s, but I was not especially interested in perfume at the time and have no memory of it — the perfume I remember smelling everywhere in the mid-1990s was Calvin Klein's CK One. My first memory of Angel is from many years later, around 2004, when I received a spray vial in a swap. The vial had leaked very slightly, and the smell of the package, even before I had it open, was horrifying. I quickly identified the culprit and sealed it in a plastic bag in an attempt to dampen the impressive sillage. I disposed of the smelly packaging, left the vial on my desk and went out to run a few errands. On entering my house a few hours later, the first thing I smelled was — you guessed it — Angel. I escorted it directly to the outside garbage cans, and that was my last encounter with Angel for quite some time.

What shocked me, mostly, was the patchouli, or more specifically, the "unusually high 30 percent concentration of woodsy patchouli" that had been added to keep the fragrance from being overly sweet.3 The heavy patchouli was the brainchild of perfumer Yves de Chiris, who knew something had to counteract the candyfloss, chocolate and caramel reportedly inspired by Mugler's memories of a childhood fairground. The combination is beautifully balanced, but it's also heady, and especially in the early stages, jarring — Angel invariably gets a mention in any discussion of perfumes people would least like to smell in, say, a small elevator, or a window-less office.

I'm no longer the patchouli-virgin I was in 2004, and it's been some time since Angel had the power to disturb me. Wearing it for the past week or so while writing this, I've been surprised by how much I enjoy it, and how much better it is than most of its (many) imitators. It still isn't something I'd wear regularly, but it's an impressive scent, and all the more so when considered next to modern, overly-sanitized versions of patchouli (see Kevin's rant yesterday). Angel makes a statement.

I will leave you with a few other opinions:

Oh my! This smells awful! I got it as a sample and I can't get it off soon enough! Ugh! The smell is a combination of cheap perfume and bug repellant! — reviewer kelaine423 at MakeupAlley

The surprising aspect is that the juxtaposition works remarkably well, resulting in a fragrance that fuses the gourmand temptations of melted chocolate swirled into warm honey and the unexpectedly masculine earthiness of patchouli. Although arresting and sensual, the combination can hardly be called pretty. — Victoria at Bois de Jasmin

Like a woman in a film who seethes, "He's so annoying!" and marries him in the end, I returned to smell Angel so many times I had to buy it. — Tania Sanchez, in Perfumes: The A-Z Guide, p. 96.

Thierry Mugler Angel was developed by perfumers Olivier Cresp and Yves de Chiris; the notes include bergamot, helional, hedione, red berries, dewberry, honey, patchouli, vanilla, coumarin, chocolate, sandalwood and caramel. It is available in Eau de Parfum and Parfum, in so many sizes and bottle styles that it is impossible to list them all here. Many of the bottles are refillable. 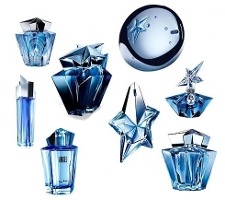 1. From the Telegraph, 5/29/2009: "Then, in the early 1990s, everything changed. His flashy clothes had been perfect for the power-dressing 1980s but began to look camp and dated next to the understated minimalism championed by designers such as Helmut Lang and Miuccia Prada. Meanwhile the grunge and waif looks were coming through as an antidote to the previous decade’s artifice and glamour." And from Women's Wear Daily, 1/21/2003:

In 1994, Georges Wichner, then U.S. president of Thierry Mugler, found himself in the aisles of a Publix supermarket near Palm Beach, Fla. It was about two years after Groupe Clarins launched Angel, the radical, blue-tinged fragrance with unmistakable food notes in a star-shaped bottle.

"I smelled it instantly on this woman and so I went up to her," Wichner recalled. "I said, 'Congratulations for wearing Thierry Mugler perfume.' She said, 'No I'm not. I'm wearing Angel.' "

5 Perfumes: Best of the 1990s
100 Fragrances Every Perfumista Should Try