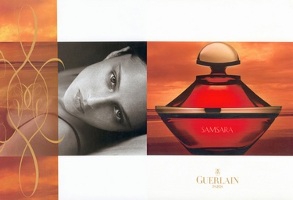 According to Michael Edwards in Perfume Legends, Guerlain Samsara was the result both of love and a calculated business decision.1 First the part about love. In 1985, Jean-Paul Guerlain made a perfume for an Englishwoman he wanted to seduce. She said she liked sandalwood and jasmine, so he designed for her a fragrance loaded with both notes. She wore it faithfully and told him people would cross the street to ask what her perfume was. (I guess when the chief perfumer for Guerlain supplies you with free, custom perfume, you wear enough to be smelled across a couple of lanes of traffic.)

Now the business angle. About the same time Jean-Paul was pitching woo to his English girlfriend, the house of Guerlain was rethinking its business strategy. For a century the company had created fragrances it thought were pretty, and marketing played a backseat role. By the mid-1980s, perfume wasn't just a luxury item created by a handful of perfume houses anymore. The tidal wave of entities selling perfume that now includes car manufacturers, jewelers, country music stars, and even fast food restaurants was just cresting the horizon. Guerlain realized it had better draw up a new business model.

Big, exotic perfumes were popular. Yves Saint Laurent Opium raced to the top of the charts in 1977, and Chanel Coco followed in 1984. Opium claimed the red-lacquered world of the Orient, and Coco snapped up Marco Polo's Venice. Guerlain decided to focus on India. For the first time, they created the concept for the perfume before the actual juice. Also for the first time, they opened up the creation of this new perfume, to be called Samsara, to outside perfumers. Jean-Paul entered his Englishwoman's perfume in the competition, and after two years and 300 perfume trials, it won.

At last, in October 1989 — over five years after its last fragrance, Jardins de Bagatelle, came out — Guerlain released Samsara. An industry periodical reported Guerlain planned to spend an unprecedented $50 million advertising it in magazines and television.2 Its intent was not only to sell Samsara, but to bring Guerlain back into the sights of perfume and cosmetics consumers. The TV commercial featured a model walking through a temple with Barbara Hendricks singing in the background. The fragrance's tagline was "a sense of serenity."

Samsara has a top note of bergamot; heart notes of Indian jasmine, narcissus, rose, and ylang ylang; and a base of sandalwood, iris, tonka bean, and vanilla. Unlike Opium and Coco, it isn't spicy or resinous. Instead, it is warm and creamy, sweet and clean. Samsara's pairing of sandalwood (as much as 30%, Edwards writes) and jasmine smells so obvious, you have to wonder why it hadn't been done before. The almost syrupy sensuality of sandalwood can be cloying on its own. Similarly, jasmine can be sharp and demanding. In Samsara, sandalwood softens jasmine, while the jasmine gives the sandalwood light and movement. Ylang ylang adds to the floral creaminess, and a touch of vanilla and tonka remind you Samsara is, after all, a Guerlain. I detect what I think is a touch of white musk in Samsara, too, adding a little soapy skin to its dry down.

Samsara is often — undeservedly, in my opinion — tarred with the same brush as some 1980s bombastic perfumes. Samsara is distinctive, true. Like Guerlain Shalimar or Chanel No. 5, you know it when you smell it. But I don't find it overly loud or demanding, especially the Eau de Toilette. (The Eau de Parfum has more sillage and a greater emphasis on the sandalwood.) It blends well with my body chemistry instead of sitting on my skin radiating berries, patchouli, and cheap musk like some perfumes do. I don't find it hard to wear, just very Samsara. Samsara may not be fashionable right now, but if you can, try it with a fresh nose. It might be just the thing for a crisp, fall day.