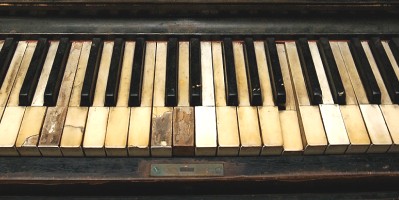 Guerlain is so straight — and obsessed with LOVE — that I often feel I’m reading snippets from a paperback romance novel as I peruse the Guerlain website. Chamade is ‘a surrender to love'. Chant d'Arômes is ‘the most exquisite love token a woman can receive’. Mitsouko was inspired by ‘an impossible passion’. Nahéma represents ‘the duality of woman’…a ‘daughter of fire’. Vol de Nuit? It’s dedicated to a tragic love story (written by Antoine de Saint-Exupéry) and ‘to women who know how to live with danger’. Even Guerlain men’s colognes are given romantic touches and a female component: Mouchoir de Monsieur conjures a world where men offered ‘a delicately perfumed handkerchief to the woman one loved’. The hokiest Guerlain advertising line concerns L’Instant de Guerlain pour homme: ‘It’s her... He knows it... This is it!’

I don’t think a perfume can ignite passion or love between people, so you’ll find me rolling my eyes or laughing as I read Guerlain perfume ad copy, and Guerlain Jicky’s ‘creation story’ is no exception. Supposedly, Aimé Guerlain, while studying in England as a young man, fell in love with a British girl who he nicknamed “Jicky.” Aimé’s and Jicky’s love was unrequited and Aimé returned to Paris alone and, decades later, created Jicky, the perfume, in honor of his lost love. Another story has Aimé naming the perfume after his favorite nephew, Jacques (“Jicky”) Guerlain — the boy who grew up to create Mitsouko, L’Heure Bleue and Shalimar. I prefer the nephew version of this story: it keeps Jicky “in the family” and makes more sense, since Aimé was a confirmed bachelor.

Here’s what we do know about Jicky, the legendary perfume: it debuted in 1889 and has been in manufacture longer than any other fragrance; it used new synthetic perfume ingredients, coumarin and vanillin, along with a decidedly un-demure dose of civet; and for decades, it was favored by men before being adopted by (and marketed to) women.* Before Jicky, perfumes were ‘written’ in clear, easy-to-read letters: ROSE, JASMINE, LAVENDER (short-lived soliflores and quasi-soliflores were the norm). Jicky was written in personality-filled cursive; its blend of natural and synthetic ingredients resulted in a complex and powerful perfume — Jicky was not easy to “read.”

I bought my first bottle of Jicky Eau de Toilette in November of 1995 right before taking a three-week trip home to Virginia to visit my mother. When I arrived, the weather was cloudy and cold, and every day seemed to begin and end with spooky fog shrouding the landscape. I slept in my grandmother’s room, a room that had been uninhabited for 15 years, and the tiny space smelled of old wallpaper and books, and the lavender-, violet- and rose-scented soaps and boxes of talcum powder my grandmother had placed in each bureau drawer and closet. I wore Jicky every day of my trip, even sprayed it to freshen the air, and its aroma permeated not only my grandmother’s room, but the entire upstairs of the house.

Everyone who wears perfume or who pays close attention to scents (be they food smells, the scents of animals and plants, the earth itself, or the aromas coming from buildings — libraries, schools, grocery stores) knows that sometimes, one smell or fragrance, will attach itself to a place, person, event or time period. Jicky infused a quiet, autumnal moment in my life, and thru no fault of its own, came to represent approaching winter and “the past.”

Jicky’s original list of ingredients included mandarin, lemon, bergamot, rosewood, orris root, rose, jasmine, patchouli, vetiver, leather, amber, civet, incense, tonka bean and benzoin. I have not smelled “vintage” Jicky, but it must have packed a punch. Today, according to Guerlain, Jicky contains bergamot, rosemary, lavender, rose, “fern harmony” with geranium, tonka bean, woods, vanilla and opoponax. The Jicky Eau de Toilette I bought in 1995 was “louder” than today’s formulation: it was clear, shimmering and icy and the top notes seemed to last longer; but what comes out of the Jicky bottle today is unmistakably Jicky.

Jicky Eau de Toilette opens with a blast of citrus so tart it can make your eyes water and a strong coumarin-tonka bean note, a note familiar to those who’ve had the good luck to smell Houbigant Fougère Royale. Jicky’s coumarin note seems to crystallize in the air, and then collapse under its own weight, revealing smooth herbal and forest accords. As Jicky develops, I notice puffs of civet, a touch of barbershop, not gourmand, vanilla and faded lavender. Overall, Jicky Eau de Toilette is not ‘smooth’ on me; there is a dissonance in the fragrance that I’ll “blame” on the civet — Jicky seems to be perfuming (trying to mask) something ‘indecent.’ Within 30 minutes of application, Jicky Eau de Toilette becomes muted and smells a bit like the faded soaps and powders in my grandmother’s dressers.

Wearing Jicky reminds me of my grandmother (who, as far as I know, never smelled it) simply because I sprayed Jicky in her room each day on my trip home. Jicky reminds me of my mother and her dog, Asa, because I hugged them both each day on my trip and they smelled of Jicky too. Jicky reminds me of late autumn and fog, and the damp woods and seething November seashores my mother and I visited together on my trip. One day, on a walk, my mother and I went into a deserted house in the middle of a field. The house’s screened doors banged in the breeze and as we explored the gray, dim, musty, cobweb-strewn rooms with their raggedy curtains, layers of dust, and cracked plaster ceilings and walls, we found a blackbird “sleeping” on a ratty dark blue velvet cushion — it was dead but its feathers still glistened. My mother pointed to an ancient upright piano that was pushed in front of the fireplace and said: “Play something.” I played one of Erik Satie’s easy Gymnopédies. The music was haunting, even more so because the piano was horribly out of tune. Guess what perfume I wore as I serenaded my mother, the dead blackbird and the spirits of that crumbling house?

*Guerlain’s most lucrative business comes from women, but I don’t understand why Guerlain won’t market Jicky to men as well — men have been buying and wearing Jicky since 1889. I guess Jean-Paul Guerlain summed up the company’s credo best: “To imagine a scent is to imagine the woman who wears it.”