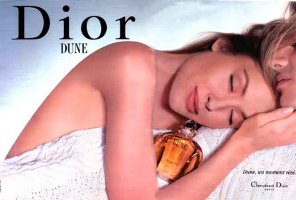 Despite being twenty years old, Christian Dior Dune seems to be seeing a resurgence — at least in the perfume blogs. Dune has been coming up a lot in comments to posts, and I’ve seen a smattering of reviews over the past year or so. Last week, I told Robin I’d like to review Dune for today. The very next day Victoria at Bois de Jasmin posted a marvelous Dune review. Apparently Dune is in the air.

Dior’s web copy could mislead a reader into wrongly thinking Dune smells like an Orange Julius at the Jersey Shore. The longer list of notes is intriguing, but it doesn’t communicate Dune’s clean, complex warmth. Although Dior designates Dune as an “oceanic floral,” don’t expect the ozone-melon of Issey Miyake Eau d’Issey or Calvin Klein Escape. I’ve also seen Dune referred to as an oriental, but to me it smells almost like an herbal-floral chypre — dry, woody, and mossy — especially in extrait.

In The Book of Perfumes, author John Oakes writes “Dune is something of an enigma…It’s certainly engendered much opinion, both for and against.” I understand that. Dune doesn’t remind me much of the ocean or even of sand. It’s singular, and it's hard to describe. Really, Dune is just Dune.

At first, Dune Eau de Toilette smells of lavender, anise, and waxy aldehydes. It’s clean, dry, and almost masculine. Within seconds it warms, and its delicate and strange floral heart emerges to balance its herbs and wood. Except for iris, I can’t pick out Dune’s individual flowers. They smell dried — not like potpourri, but like the desert. A hint of amber sweetens Dune, the tiniest touch of white musk keeps it clean (but not fresh), and moss — or is it a woody musk? — blurs the whole composition. In the end, Dune feels like a slightly scratchy, feather-weight mohair throw that has been stored in a wooden chest with lavender sachets and a chunk of asphalt. It is light but not radiant, and elegant but not fashionable. Dune in Parfum is mossier, muskier, and more dense than the Eau de Toilette.

Dune stays rich in its fusty way, but close to the skin, like having washed with a scented soap. Even the Eau de Toilette lasts a long time. A few spritzes in the morning will make it to dinner, no problem, but I’m not sure it suits night. In the evening, I’d top off Dune’s residue with a few lavender-amber drops of Jean Patou Moment Suprême, or even just a straight amber. The day after wearing Dune, a sweeter version of the fragrance infuses my sweater.

So, why is Dune resurfacing after all these years? The former head of Parfum Christian Dior, Maurice Roger, said Dune was created as an antithesis to the demanding fragrances of the 1980s. It was meant to be serene and calming after the broad-shouldered, hard-partying Dynasty years. Maybe we're looking for our own calm now, not from the excesses of greed, but from economic uncertainty. Or, maybe it's simply that Dune is still one of the most interesting mainstream fragrances on the market.

I’ve seen Christian Dior Dune Eau de Toilette at department stores, online, and even at the drugstore. The Extrait de Parfum no longer appears to be in production.