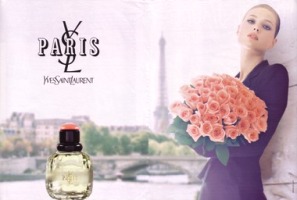 In a sense, I was influenced by Après L'Ondée (1906). I love Guerlain fragrances, but I said to myself that, if I were to make Après L'Ondée today, it would be much lighter, airier, younger. Some pieces I wouldn't use. So Paris started as an imagined Après L'Ondée. Obviously, in Après L'Ondée, you don't have roses in the background, but I had the skeleton of a very creamy violet note. Then I worked on the rose to put with it.

That's perfumer Sophia Grojsman talking about the genesis of Yves Saint Laurent Paris (from Michael Edwards' Perfume Legends: French feminine fragrances, p. 200), her first fragrance. Paris debuted in 1983, and was the perfect fragrance for the time: I wore it, my mother wore it, some days it seemed like everyone wore it (and plenty of it, more about which below).

Paris opens fruity and bright and big, with a happy, optimistic air. The heart is lush, jammy roses softened by Grojsman's "creamy violet note". Yves Saint Laurent had reportedly chosen the name Paris and the color pink before the fragrance was developed, and yet while Paris speaks in pastel tones, the pastels are done in technicolor — it's extraordinarily feminine, almost ironically so, and it's entirely romantic, but there isn't anything girly about it. It is effusive rather than retiring, and it's the perfect match for the broad-shouldered, bright pink jacket (and the drive to Paris in the convertible with the two boys in the back) in the ad spot I posted last night.

Somewhere about an hour or so in, Paris's bright pink sky starts to turn cloudy, and it is only then that a touch of Après L'Ondée's wistfulness is evident. The sandalwood base in my rather old bottle has aged beautifully, and the light dusting of powder sets it off perfectly; wearing it last night after a long absence, I was struck by how gorgeous it is — I'd entirely forgotten. Still, Paris smells entirely of its time, so much so that I was startled to realize that Grojsman created Prescriptives Calyx only three short years later — Calyx could have come out yesterday and I'd be just as enthusiastic about it. Paris, well, I adore Paris but it isn't something I'm likely to reach for today. Tania Sanchez, writing in Perfumes: The Guide, calls Paris a "brilliant, beautiful monster", and advises the reader to "Buy it, but put it on at your peril". It is quite true that Paris sprayed is now too much Paris, at least for me. I distinctly remember spraying Paris on with abandon back in the day, now, I can appreciate it easier when it has been decanted and dabbed.

I've only tried a few of the limited edition Paris flankers (a new one generally rolls out every year; the latest is Paris Pont des Amours), but those I've smelled have mostly been lighter, fruitier, and girlier than the parent, and some women may find them easier to wear.