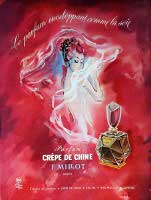 Friday afternoon I scoped the downtown department stores for something new and interesting to smell. At one department store, the sales associate showed me lots of recent but ultimately uninspiring perfumes — all Angel rip-offs or fruit-ridden musks. We ended the tour at the Trish McEvoy counter where she raved about one of them that ended up smelling like a baby-shampoo-scented candle on me. At Macy's, the sales associate said there weren't any new releases for women, only for men. "Maybe Shalimar L'Oiseau de Paradis?" I tried, thinking I could at least look at a pretty bottle. "We didn't get that one," she said and turned her back, leaving me neglected in a forest of celebrity fragrances. Discouraged, I returned home to a surefire remedy for mediocrity and bad manners: Millot Crêpe de Chine.

Richard Stamelman, in his book Perfume: Joy, Obsession, Scandal, Sin, tells the story of Crêpe de Chine's launch at the Paris Art Deco Exposition on June 6, 1925. Guerlain Shalimar and the Jean Patou trio Amour Amour, Que Sais-Je, and Adieu Sagesse were also introduced that day in an elaborate fragrance show area featuring a perfume fountain and deco fixtures. Actress Eva Le Gallienne and dancers from the Folies Bergère and Moulin Rouge performed. (If I ever get my hands on a time machine, this is where I'm headed).

Crêpe de Chine was reportedly the first perfume to be assembled under argon gas, away from light, and under a constant temperature for consistency and fidelity. In an article about the Osmothèque for the New York Times, Chandler Burr quotes Jean Kerléo, former house perfumer for Patou and founder of the Osmothèque, as saying Crêpe de Chine was the first fragrance in the Osmothèque's collection. He said it's a descendant of Chanel No. 5 and Coty Chypre, but with the addition of a chemical that smells like raw hazelnut. He said Crêpe de Chine would be prohibitively expensive to make today because of its rare Grasse jasmine.

But enough with the history, you might be saying. What does it smell like? To me, Crêpe de Chine parfum is an autumn night in a vial. It smells like aldehydes and neroli that quickly turn to clove-tinged, dark jasmine cloaked in deep woods and moss. Lots of wood, lots of moss. It's dry, warm, and elegant, and as it wears it evolves into more of a warm presence than an actual fragrance. If it were a color, it would be mahogany with a satin finish. If it were music, it would be something haunting and intelligent played on an oboe. If it were a woman, she would have chestnut-colored eyes, read French novels, prefer Burgundy over Bordeaux, and have a secret love of roller coasters.

Unfortunately, the parfum runs through its paces pretty quickly, and after a few hours I can only smell a hint of its full body. I'm stingy with the little bit that I have, but I would love to spend time in a woman's room who had worn it daily for years, so that her curtains and bedspread smelled of it. (I say "woman" here, but Crêpe de Chine would be great on a man, too). For me, wearing Crêpe de Chine is a way to connect to another time and place — one that may only really exist in my mind.

1. Update: When, exactly, Crêpe de Chine was discontinued is up for debate. I’ve heard anecdotal reports of people buying it as late as the early 1970s, but I can’t find any authoritative date that it stopped being produced.

26 Vintage Fragrances Every Perfumista Should Try
Perfume and Silk Stockings