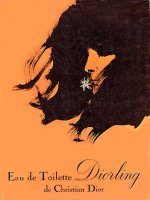 Last night before I went out for a drink with a friend, I sprayed one Eau de Toilette on my left wrist and another on my right wrist. I went into the living room, held out my arms wrists up, and said to my friend, "What do you think of these perfumes?"

She sniffed each wrist and said, "This one smells kind of light and alcohol-y. That one is a diva. It's really strong and reminds me of something..."

"Well," I told her, "They're the same perfume: Diorling by Christian Dior. This one —" Here I pointed with some disgust at the wrist with the light, fizzy scent, "Is the new version. The other one is the old one."

Paul Vacher, the nose behind the sublime Miss Dior, created Diorling in 1963. Diorling is a leather chypre with its leather front-loaded. On first spritz of the vintage Diorling, I smell strong, elegant leather, like unwrapping the tissue around a pair of new stilettos with an orange flower blossom, stem attached, stuffed in each toe. After an hour or so, a glorious white floral heart joins the leather, quieter now, and Diorling becomes much more approachable. Half a day later, Diorling fades to a close hum of oakmoss, patchouli, and — still — a little leather. I adore it.

Sometime in the past 45 years, Dior took hold of the Mona Lisa that is Diorling and started cranking out paint-by-number versions of it. The sample I have of the reformulated Diorling is from a brand new bottle. Instead of opening with unapologetic leather, it starts pale and aldehydic and quickly turns to soapy jasmine and lily of the valley. It's pretty, but not as pretty as Caron Nocturnes, which at this point seems modeled along the same lines. After a quarter of an hour, I smell leather, but it is an undercurrent so spare that it plays Melanie to the real Diorling's Scarlett O'Hara. To make things worse, all the chypre has been sucked out of it. Two hours after two full sprays and the new Diorling has disappeared completely.

For a gentle leather-floral fragrance, I prefer Hermès Kelly Caleche. Kelly Caleche is brighter than the new Diorling, and has rose where Diorling has white flowers, but in my mind it's so much more satisfying. For a grand leather scent, either get your hands on some vintage Diorling or satisfy yourself with some combination of Robert Piguet Bandit, Grès Cabochard, Caron Tabac Blond, and Serge Lutens Cuir Mauresque. But while each of these leather scents is wonderful in its own way, none is the original Diorling.

The new Diorling is only sold at the flagship Christian Dior boutique in Paris, at the Bon Marché in Paris, and at the Roja Dove boutique at Harrods in London.