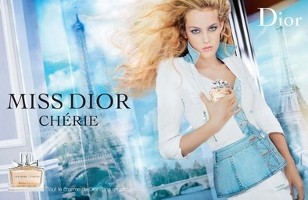 Galliano was said to have found the inspiration for Miss Dior Chérie in the Stevie Wonder song "My Cherie Amour" and in a Dior dress of the 1940s called "Chérie". His fragrance, however, is calculated to attract a decidedly modern customer:

"I did not want to rebrand a classic, nor would the new Miss Dior want to wear a re-bottled Miss Dior. As fashion evolves so must its scent, she needs to have something that captures her in the moment of today," he commented at the launch. (via cosmeticsinternational)

Miss Dior Chérie starts with very sweet strawberry punch and a brief flash of mandarin; the overall impression is closer to a strawberry-apple popsicle than the more sophisticated wild strawberry sorbet described in the notes. I do not smell anything like popcorn, but the sugar takes on a caramelized aspect very quickly, giving it a somewhat warmer feel while retaining the sweetness of the top notes. The florals are an indistinct backdrop to a dry down of musk and patchouli, both of which are quite sanitized and would not smell at all disturbing on a 10 year old.

It stays sweet and fruity right through to the end, but it is not a heavy fragrance by any means. The overall effect is very young and trendy, which I gather is what was intended. It is described by Dior as a "gourmand chypre", but it has nothing in the least chypre-ish about it, so I assume that was just meant as a nod to the original Miss Dior.

Being neither young nor tendy, I am quite outside of the target group for Miss Dior Chérie, so perhaps it is no surprise that it does not appeal to me in the least. There are far worse sweet, fruity scents out there, but personally I would much rather wear Miss Dior, or for that matter, Galliano's lovely room spray, created by Olivia Giacobetti for Diptyque. Do you suppose old ladies like me shook their heads in bewilderment when Miss Dior was released in 1947? I'd love to know.

I would also love to know why the Dior Homme line under Hedi Slimane seems to be taking such a radically different approach to fragrance. The recent Dior Homme trio (Cologne Blanche, Bois d'Argent and Eau Noire) and the upcoming Dior Homme signature fragrance seem geared towards a considerably more sophisticated, upscale market than Miss Dior Chérie. 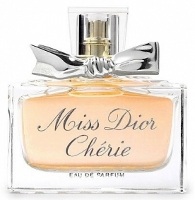 Update: in 2011, Dior began to call Miss Dior Chérie simply "Miss Dior", and to refer to the original Miss Dior as "Miss Dior Classic" or "Miss Dior Original". It was also reformulated; if I remember correctly, the reformulation preceded the name change.