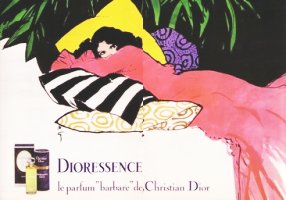 Although it took me a while to appreciate some of the classic Christian Diors, as I've become more experienced with perfume I've come to love them more and more. For instance, the first time I tried Miss Dior and Diorella, I wasn't sure about them. They were intriguing, but I wasn't ready for them yet. Dioressence, on the other hand, I loved at first sniff. What I didn't know was that my first sniff was of the vintage Dioressence.

Dior's website describes Dioressence as a "spicy oriental" and lists its top notes as aldehydes, greens and fruit; its heart as jasmine, geranium, cinnamon, carnation, orris, ylang ylang and tuberose; and its base as patchouli, oakmoss, vetiver, vanilla and musk.

Osmoz lists Dioressence as a "floral chypre" and adds orange and bergamot to its top notes; rose to its heart; and benzoin to its base.

Guy Robert, the legendary nose responsible for Hermès Calèche, Rochas Madame Rochas, and Chanel No. 19*, created Dioressence in 1979. In The Emperor of Scent, Chandler Burr recounts Luca Turin telling the story of how Dior executives asked Robert to create a fragrance that was "animalic", would live up to the slogan le parfum barbare, and would be called Dioressence (p. 146, paperback edition). The rest was up to Robert. He didn't have a firm direction for the fragrance until kismet intervened and Robert washed his ambergris-coated hands with soap impregnated with the scent of a Miss Dior knock-off. Bingo! Animal and elegance with a clear tie to Dior.

Burr goes on to record Turin's response to the current, reformulated version of Dioressence as "...it's now a lie, a total lie to the original, to what it was." Later, Turin wrote in his now defunct blog, “The last time the word barbare was used in earnest in perfumery was in the slogan of Dioressence, and that was the genuine article with a weird, scary, overripe, almost garbage-like note.” I read all of this before I ever smelled Dioressence, but I was still eager to smell it, no matter what the version. A "weird, scary" note? Who could resist that? I figured that my nose probably wasn't sophisticated enough to pick up on any compromise in the new Dioressence. After all, I liked the new Miss Dior well enough.

I arranged for a sample of Dioressence through a swap, and eagerly sprayed it on my arm. It kicked off with an intriguing mix of soap and rot. The rot was not musky like body odor, but decomposed, like the vague dead squirrel smell I catch here and there in Guerlain Jicky and Shalimar. The rot smell faded to the background, and a gorgeous floral bouquet, languorous and spicy, nudged in, supremely blended and supremely French in feel. For all its richness, Dioressence wasn't heavy, and even though the sample was only of the Eau de Toilette, it lasted for hours. I had to have a bottle of it.

Perhaps you noticed the foreshadowing I put in the first paragraph. Yep, my new bottle of the reformulated Dioressence was a bitter disappointment. I felt robbed. The sample I'd first tried and fell in love with must have been vintage. Instead of a compelling, odd, but beautiful scent, I had a bottle of pleasant, rosy, spicy, soapy fragrance that lasted on the skin two hours, tops. I should have been warned when I saw that Dior had moved away from its original barbare description of Dioressence toward the innocuous "mysterious Orient" theme.

All I can say is: Dior, shame on you. I see that recently Dior decided to make the classic fragrances (Miss Dior, Diorella, Diorissimo, and Dioressence) more exclusive in the United States by selling them only at Saks Fifth Avenue. Dior also recently released three expensive, limited edition fragrances (La Collection Particuliere). None of these moves toward repositioning Dior perfume as truly top shelf will succeed as long as the juice is a cheap imitation of its original glory. I'd rather pay twice as much for a vintage bottle of Dioressence (which will last me twice as long having twice the persistence, by the way) than buy a new bottle any day. Poor Guy Robert. Well, at least he still has Chanel No. 19.

* Oops, Chanel No. 19 was by perfumer Henri Robert.