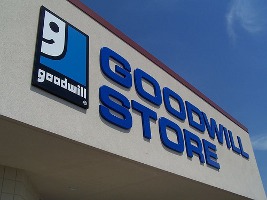 When last week's review of Norell elicited almost more comments about the bottle of Amouage Gold I found at Goodwill than it did about Norell, I decided to share what I know about finding perfume in thrift shops. Some of you probably live or work within blocks of vintage Guerlains and Chanels going for less than a ten spot and don't even know it. It's time to get those bottles off the shelves and onto the bodies of people who love them.

You might protest that your thrift shops don't have anything but Avon figurines with peeling labels. But think about it: every town, no matter how small, has at least one glamour puss. She will almost certainly offload a bottle or two of something nice at some point. Plus, people who don't love perfume often receive bottles as gifts. After a few years they figure that bottle of Chamade Eau de Cologne they received for Mother's Day a few years ago has surely gone bad so they give it to the Salvation Army. And then there's the occasional love affair turned sour that lands a nearly full bottle of Yves Saint Laurent Paris down at the Teen Challenge thrift shop.

Before you head off to find some bargain perfume, it pays to consider your attitude. Some people are repulsed by thrift stores. They don't want to be sullied by other people's dirty cast offs. With that kind of approach you'll never have the fortitude to make the big scores. Me, I love rummaging through people's old things. Before I found the bottle of Amouage, I visited the same store three times and didn't buy a thing. On the fourth trip, I came home not only with Amouage Gold, but Norell and a gorgeous sea green Murano bowl from the 1960s that is now on my vanity full of bracelets. Right afterward I found a lemon yellow, Danish cast iron gratin dish.  (I filled it that weekend with a roasted mixture of Savoy cabbage, potatoes, leeks, sage, brown butter, and Taleggio cheese and devoured a bowl of it with a glass of Montepulciano while it rained. Heaven.) If you don't love the chase, you won't make the kill.

Now for the practical bit. First, not every thrift store carries perfume. In fact, probably only every third thrift store does. Even within the same chain of thrift stores, for instance Goodwill, some stores have perfume and some don't. If the store does carry perfume, it's probably routinely sold in the same area of the store. Sometimes that area is a shelf jumbled with candles and bath things, often it's near the jewelry, and sometimes it hangs in its own hard-to-predict area. It's worth asking right away if the store has perfume and where it is.

Often a thrift store will put what it considers its most valuable items in a locked case. Fortunately for us, the thrift stores are most likely to lock up Ralph Lauren Romance and leave that bottle of Creed to languish with a dusty Cachet and some old Victoria's Secret specials. You don't believe me? I bought a full bottle of Creed Fleurissimo for $9.99 at a thrift store that had locked away its Vera Wang Princess. So make sure you ask if all the perfume is in one area.

Now that you've found some stores that carry perfume, keep going back. Don't go just to find a deal on perfume, but marvel at the old desk sets, clowns painted on velvet, and Frankoma coffee mugs. Wonder about the woman who bought a burgundy patent leather purse with matching shoes in the early 1960s but apparently never wore them. Be mystified at the massive number of figurative salt and pepper shakers. Start to explore the crazy but normal lives behind junk. (And while you're there, keep an eye out for hand-embroidered pillow cases and etched crystal champagne glasses.) Your eye for beauty and quality will deepen, and soon you'll snatch up the Andrew Gn suede pumps with a grosgrain bow at the toe (only $4.99!) and dazzlingly chic 1980s Louis Féraud pinstriped suit ($16.99, can you believe it?), and the bottle of Mitsouko Eau de Parfum will be gravy.

Finally, I firmly believe in and practice perfume karma. If you stumble on a bottle of Chanel No. 5 Eau de Toilette, you already have plenty, and besides it never really was your favorite, leave it for someone else. If you luck out and find a large bottle of vintage Hermès Calèche, be free with the decants you give away. It will come back to you sevenfold. One more thing: if you find a bottle of Lanvin Scandal, send it to me.

For more information about buying old perfume, have a look at Perfumista Tip: How to Buy Vintage Perfume.

Note: image is Bargains by Valerie Everett at flickr; some rights reserved.