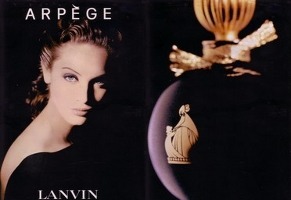 In 1927, Jeanne Lanvin asked André Fraysse to create a perfume for her daughter’s 30th birthday. Fraysse was only 27 years old, but with Paul Vacher’s help he created what is often recognized as the second great aldehydic floral fragrance, and one of the five most esteemed in the world: Arpège.

Hubert Fraysse reformulated Arpège in 1993. I haven’t smelled the original Arpège, but the consensus seems to be that the reformulation is a respectful play on the original. Combining Osmoz and Basenotes’s information for the newest version of Arpège yields topnotes of aldehydes, bergamot, neroli, and peach; a heart of jasmine, rose, lily of the valley, ylang ylang, coriander, and tuberose; and a base of sandalwood, vanilla, tuberose, vetiver, patchouli, and styrax.

Where Chanel No. 5 is languid, Arpège is full-bodied. If No. 5 is a vase of summer flowers, then Arpège is that same vase three days later, flowers ripe and spicy, with a dirtier base. Neroli slices into the Arpège’s lush heart, where the lily of the valley takes over its role, giving balance to the more velvety body of the scent. I can imagine the woman who wears Arpège in cooler months turning to Guerlain Chamade during the spring and summer. As different as these fragrances are, both are full-bodied floral perfumes with a similar amount of personality, sillage, and craftsmanship.

In some ways, Arpège feels like the least aldehydic of the floral aldehydes I’m reviewing this week and more like a floral leaning toward floral-oriental. When I first tried Arpège I thought it was a little fusty and formal (although Colette called the original “thoroughly modern”). Now, after wearing it for five days I’m hooked. It feels deep and elegant and wants to drag me out on rainy nights to see sopranos singing Schumann, followed by champagne and candlelight and polished mahogany tables. I’m definitely investing in a bottle of this one.

One last note: Does anyone know who Hubert Fraysse is? Is he related to André? I’d love to know other fragrances he’s created but I can’t find anything about him.

Lanvin Arpège can be found at many department stores and online discounters. Scentiments, for instance, lists a 50 ml bottle of Eau de Parfum for $28.99.